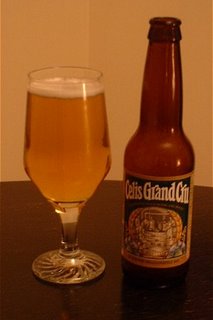 About 10 years ago, when my interest in trying new and different beers was really kicking in, I read about a beer called Celis White that Waterloo’s Brick Brewery had just started brewing in Ontario under contract. This was a Belgian Witbier, a style I had never heard of, and the idea of a beer being brewed with orange and coriander seemed to foreign and exciting. I couldn’t wait to try it, and once I did it became a quick favourite.

It wasn’t until a couple of years later when the beer suddenly disappeared from Ontario stores that I did a bit of research and discovered that the father of this fine beverage, one Pierre Celis, had actually rescued the Belgian Witbier style from near extinction back in the 1960s when he founded the Brouwerij de Kluis in his hometown of Hoegaarden and created the now ubiquitous Hoegaarden Wit. In the late 1980s, Celis retired and sold his brewery to Interbrew – now part of the massive brewing conglomerate InBev – and moved to the unlikely location of Austin, Texas, where he soon caught the brewing bug again and opened Celis Brewery, with the flagship beer being Celis White.

A few years down the road, Celis retired again and sold the brewery to Miller, who basically had no idea what to do with it. After letting it flounder for a few years, they shut it down in 2001 – which is around the same time that Brick stopped brewing it for Ontario – and sold the Celis brands to Michigan Brewing the following year. Ever since then, I’ve wanted to try some of the other Celis brands, so I made a point of checking for them during my recent trip to Michigan (yes, the road trip & festival report is still coming soon!) and picked up a bottle of Celis Grand Cru.

This beer poured a clear bright golden colour with a pillowy white head that quickly dissipated. The clarity of the beer surprised me as I was expecting something similar to the pale yellow milkiness of the Celis White, but the connection between the beers is obvious in the aroma, which holds notes of yeast, spice and orange zest. The orange comes through strong in the flavour as well – sweet off the top, tart and dry in the finish – alongside some tingly spiciness and a pleasant alcohol warmth (it’s an 8%er, so I was expecting that). The body is a bit on the sticky side, and it’s not quite as assertive as the Hoegaarden Grand Cru I tried recently, but it certainly holds up well against it. The folks at RateBeer consider it fairly average – 3.2 out of 5 rating, 55.1 style percentile – but I’d rank it higher than that personally.

And in case you’re wondering what Mr. Celis is up to now: he moved back to Belgium after the Miller sale, but has now at least partially unretired once again and is teaming up with Real Ale Brewing in Blanco, Texas to launch a new wheat beer called Brussels Grand Cru. Even at the age of 81, it’s obvious that he’s got a lot of brewing left in him yet.

This entry was posted in beer reviews and tagged Belgian ale, Michigan. Bookmark the permalink.