First of all, I should mention that due to my knowledge of the location and appearance of NYC landmarks being completely pathetic, I was wrong about being able to see the Empire State Building from my hotel window. It’s actually the Chrysler Building. D’oh. 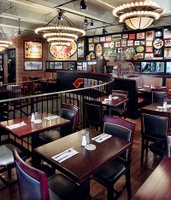 I did, however, walk over to the ESB last night to visit one of the locations of Heartland Brewery (350 5th Ave. at 34th St.), a brewpub chain with several spots around Manhattan. The atmosphere of the place is an interesting mixture of comfortable elegance and kitsch, with dark wooden tables and leather chairs & benches surrounded by beer posters and paraphernalia from around the world. As you might expect from the location, it attracts a lot of tourists, and the prices definately reflect that: a pint of beer will run you around US$6, and the food is equally pricey, i.e. US$17 for three crab cakes and a slightly wilted green salad. At least the crab cakes were tasty, with a high crabmeat-to-filler ratio, and a nice homemade tartar sauce on the side.

As for their beers, they have a half-dozen regular offerings – including the expected light lager, pale ale, wheat & stout – as well as several seasonals. I had a taste of everything on offer, and found my favourites to be Farmer Jon’s Oatmeal Stout, Smiling Pumpkin Ale and Indiana Pale Ale. The stout was a little thin on the palate, but the aroma and flavour made up for it, with notes of toffee, treacle, cocoa and smoke, and a nicely bittered finish. Smiling Pumpkin is a flavourful autumn seasonal made with honey-roasted pumpkin and a load of spices, giving it that “liquid pumpkin pie” vibe that I really like. And the Indiana PA is simply a well-made, hoppy pale ale, with a lot of citrus and spruce in the flavour.

I was also planning on downing a pint or two at The Ginger Man (11 E. 36th St. near 5th Ave.), but when I passed by both before and after my Heartland visit, I found it packed to the gills. I’d been warned that this is a popular spot, but I didn’t expect such a crowd on a Monday night. It appears to be a great place, though – beautiful decor, an appetizing looking food menu, and a fantastic selection of beer on tap and in bottles. If my course lets out early enough on Friday, I may give it another shot and hope that it’s not as insane in the afternoons.

In the meantime, the course is going very well, and I’m looking forward to an event tonight that will likely be the highlight of my visit to NYC. More about that tomorrow…

This entry was posted in bars & pubs, brewpubs, travel and tagged NYC. Bookmark the permalink.