[Yeah, I’m still really busy – maybe I’ll get these NYC posts finished before the next time I travel down there…]

The trade tasting event that I attended on Tuesday had brought brewers from around the world into NYC, and several of them set up other events during their visit to give their beers some more exposure to the public at large, such as the sadly cancelled Schlenkerla night that I tried to attend on Sunday at The Collins Bar. The one that I was really excited about, though, was the Rogue night at Barcade in Brooklyn, which was set to feature 20 Rogue beers on tap – including a few rarities – and brewmaster John Maier in attendance. 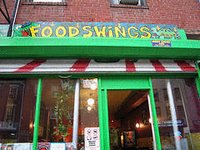 HopStop maps in hand, I caught the subway out to the wilds of Williamsburg for a mini barhop. Before the drinking began, I satisfied my craving for something tasty and slightly greasy with a mock-meatball sandwich at Foodswings (295 Grand St.), a vegan fast food joint that even a carnivore could love. No tofu & spouts, hippie-dippie, peace & love shit at this place – the staff is pierced and tattooed, the music is down and dirty, and the menu features vegan versions of all your greasy spoon and pub grub faves, including chili con soya, “fish” & chips, nachos and “chicken” drumsticks. 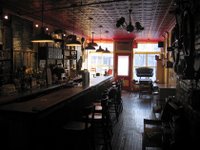 It’s also conveniently located just a couple of blocks from Spuyten Duyvil (359 Metropolitan Ave.), an unassuming looking place that has been voted the #4 Beer Bar in the U.S. on RateBeer and has been named the Best NYC Beer Bar by both New York Magazine and TimeOut New York. Like many of the bars I visited during my trip, Spuyten is a small place with a friendly neighbourhood vibe and tons of quirky character. The food menu is limited to plates of cheese and cold cuts, but patrons are welcome to bring in other food if desired. The tap list is small in size (6 draughts and a single cask) but big in quality, and the bottle list is astoundingly good, featuring an impeccably chosen selection of brews from around the world, including a good number of Belgians and more than a few rare and obscure treats. Since I was visiting solo, it was hard to justify dropping the big bucks on a 750 ml bottle of Cantillon or Fantome, so I stuck with a pint of Lagunitas Pils, a lean & well-balanced Bohemian pilsner, and a bottle of Kerkom Bink Blond, a surprisingly hoppy Belgian ale. 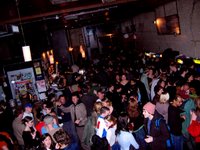 After that, it was off to Barcade (388 Union Ave.), which is one of the few “concept” bars I’ve been to that I actually enjoyed. A lot. Located in what seems to be a renovated garage or warehouse space of some sort, Barcade combines two of the best things in the world: great beer and classic video games. For someone who spent most of the early 80s converting my paper route earnings to quarters in order to get my fix of Robotron 2084 and Time Pilot, this place was like heaven. I arrived with a pocket full of quarters to find the place packed to the gills, and after fighting my way to the bar for a pint of Rogue Chocolate Stout on cask, I headed to the machines and started feeding them. The Chocolate was so good that it just had to be followed by another, during which I briefly met John Maier who was being mobbed like a rock star. Second pint of Chocolate drained, I considered having a third, but then realised that of the 20 Rogue beers on tap, there were probably at least a half-dozen that I would never have a chance to try again unless I visited the brewery in person. So I went for a glass of Rogue Love & Hoppiness, a robust pilsner that Maier and his wife, Stacey Wacker, originally brewed last year on Valentine’s Day to be served at their wedding on April 9th, 2005. It was a very pleasant surprise from a brewer better known for his ales, and a great choice for my last beer of the night.

Then it was back to the subway and off to my hotel in Manhattan, with one more day and night left ahead if me to enjoy the city. I’ll try to get the report of my last night on the town posted in less than a week this time, but I make no promises…

This entry was posted in bars & pubs, food, travel and tagged NYC. Bookmark the permalink.