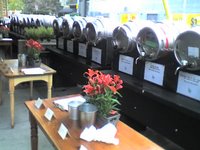 One of the great mysteries of the Toronto beer scene is how a cozy family-run Italian restaurant called Volo has become a go-to destination for all serious beer aficionados. One of these days I’m going to have to do an interview with owner Ralph Morana to get the full story, but for now, we can just enjoy the fruits of his tireless labours to bring the best of the beer world to thirsty Torontonians.

The latest example was Volo’s second annual Cask Days festival, where Ralph invited over 20 Ontario craft brewers – as well as a couple of homebrewers and a special guest from Quebec – to provide cask ales that were served up over the course of two sessions on Saturday, October 21st. In a city where the number of bars that serve cask ale on a regular basis can be counted on two hands, the idea of having somewhere around 30 casks available for sampling in a single location is like beer heaven, even if it only lasts for a few hours. 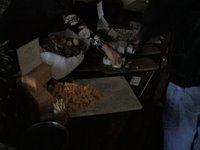 Of course, as previous Volo events have proven, Ralph and his wife, Aina, and the rest of the Volo crew never do things by half measures. In addition to bringing together an outstanding line-up of beer, they also provided complimentary cheese from a variety of Ontario artisan cheese producers. And throughout the day, Ralph and staff walked through the crowd with baskets of sandwiches, pasties, and other tasty treats to help our tummies absorb all the beer we were downing.

And as for the beer itself, the brewers really stepped up with a selection that included lots of one-offs, ranging from variations to existing beers (lots of barrel-aging and wet- & dry-hopping) to brand new beers brewed exclusively for the event. I tried a dozen or so over the course of the day, and all of them pleased me in some way, but I had a few favourites: 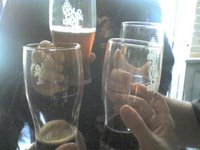 Biergotter Hopocalypse
This IPA from the Biergotter Homebrew Club was definitely the buzz beer of the festival, and with good reason. It was a big, ballsy beer that was heavily influenced by West Coast IPAs, with a huge hop aroma and flavour, but enough malt in there to keep it from being completely ridiculous. More than one person was heard to say that someone needs to give these guys some cash to open a brewpub or brewery. Check out their extensive blog post about the day, as well as the recipe for Hopocalypse.

Dieu Du Ciel! PÃ©chÃ© Mortel, Corne Du Diable & Vaisseau des Songes
Ralph scored quite a coup when he convinced the folks at Montreal’s venerable Dieu Du Ciel! brewpub to participate in this event. Due to the vagaries of Ontario liquor laws, the DDC beers (as well as the homebrews) could not be served as part of the regular admission price and had to be separately purchased with all money going to charity, but that didn’t stop them from being amongst the most popular beers of the day. PÃ©chÃ© Mortel is an absolutely decadent coffee-laced Imperial Stout that I’d previously tried in bottled form, but having it on cask was a real treat – and it was the only beer of the day that had me going back for seconds. The Corne Du Diable is described as an American-style IPA, which means a big whack of hops upside your head. The Vaisseau des Songes was a surprise addition to the fest, and while it was in keg rather than cask form, it was still very nice – I’d describe it as the little brother of Corne Du Diable, as it’s also an IPA, but much more restrained in flavour and lower in alcohol. 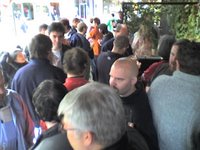 Black Oak H&H Overkill
According to Ken at Black Oak, the H&H stood for “Hops & JalapeÃ±os (pronounced: HalapeÃ±ooooo!!!!)”, which had me worried as I’m generally not a fan of chili beers. Not because I have an aversion to the hot stuff, but because most of the ones I’ve tried have simply been crappy lagers or bland golden ales with an assload of chilies thrown in. When I took my first whiff of this one, I thought it would go down the same road, as there was nothin’ but jalapeÃ±os going on in the aroma. But the flavour was surprisingly good, with the heat of the peppers taking on an almost sweet character to balance the fresh hops. Not something I’d drink every day, but still a pretty successful experiment.

Scotch Irish Admiral Perry Imperial IPA
Yeah, it’s another big honkin’ IPA. But nobody makes these suckers like Perry at Scotch Irish does. This one had so much spruce and pine on the nose that I thought I was sniffing a Christmas tree, and the hops in the flavour were absolutely ass-kicking. I wrote in my notes: “Stupidly over the top, but I liked it.” That pretty much sums it up.

According to Ralph, he had to turn away both brewers and attendees this year due to the lack of space, so there’s a germ of an idea to move it to a bigger venue next year. While it may never grow to the size and prestige of the Great British Beer Festival, it could certainly become of the premier cask ale events in North America if he sticks with it. Here’s hoping!

(PS: All of the crappy photos above were taken with my newfangled cameraphone. You can see more of them, as well as much nicer photos by people who presumably used real cameras, or perhaps cameraphones that take better photos than mine does, at the Volo Cask Days Flickr Group.)