Posted on March 6, 2007 by Greg Clow| Comments Off on Beer of the Week – Fuller’s London Pride 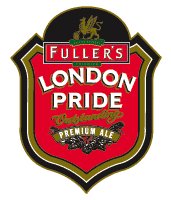 If you’ve been shopping for beer at the LCBO recently, you’ve probably noticed that the number of canned beers on the shelves has been increasing quite dramatically. A lot of them are beers of the type that you’re probably used to seeing in cans, from US bargain brands like Yankee Jim and Old Milwaukee, to an array of indistinguishable lagers from the former Eastern bloc.

But due to the same environmental initiatives that have led to the recently launched deposit return program, the LCBO has been actively sourcing other canned beers, and the result has been some surprising additions to the aluminium-clad line-up on the shelves. Most notably, there has been a mini-spike in UK ales being added to the inventory.

Now, there are some who feel that cans are not a suitable container for good quality beer. They argue that the package imparts a tinny flavour to the beer, or that it somehow cheapens the product. The first point has been rendered moot by newer technologies that ensure no metallic flavours leech into the beer. And as for the second point, it’s just a prejudice that people will have to get over. After all, the most important thing is that beer inside the container is kept in good condition, and it could be argued that in many cases, a can does a better job of that than a bottle.

A good example of the can’s superiority over the bottle can be found in Fuller’s London Pride ($2.75/500 mL, LCBO 676767). This UK-brewed bitter was previously available here in bottles, and while it was a pleasant enough ale, it always seemed to have a slightly stale character. In cans, however, I’ve found it to be fresh and lively, with well-defined bready and slightly fruity malt in the aroma, and grassy hops coming through to impart a pleasant sweet-bitter balance in the flavour.

So, please don’t fear the cans. They’re allowing us to experience some great UK ales (not to mention a few world class Pilsners that have sneaked in with the rest of the Euro-lagers) in a state that is much closer to optimum condition than a bottle could ever offer. Now, if only we could convince the LCBO to start bringing in some of the fantastic US craft beers that are available in cans…

This entry was posted in beer reviews and tagged ale, Fuller's, UK. Bookmark the permalink.