Posted on March 27, 2007 by Greg Clow| Comments Off on Beer of the Week – Fuller’s Cask-Conditioned ESB 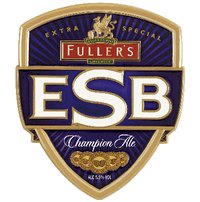 OK, full disclosure time: I haven’t actually tried this week’s Beer of the Week yet, at least not in cask-conditioned form. But given the timing of this week’s column, I couldn’t resist featuring Fuller’s Cask-Conditioned ESB as my pick.

For you see, today marks a very momentous occasion, as for the first time in a long time – perhaps ever – a cask ale from the UK will be available at a bar in Toronto. Fans of cask ale here are somewhat satiated by the products of a few local breweries being available at a handful of local pubs in cask-conditioned form, but tonight at 6:00 PM, Ralph at Volo (587 Yonge Street) will be tapping a cask of Fuller’s ESB (Extra Special Bitter), giving many local beer drinkers (including yours truly) their first taste of a real, traditional ale from across the pond.

I have had the bottled version of Fuller’s ESB, and although it was a while ago, I seem to have enjoyed it if my notes from the time are any indication:

Clear amber with a moderate off-white head that leaves some great lacing. Pleasant sweet & earthy malt on the nose. Slight creamy mouthfeel, solid malt notes to start the flavour, and good bitterness in the finish. A tasty & easy drinking bitter.

I expect the cask version will be at least as good. If you want a better idea of what to expect, you can check the ratings at RateBeer, where 72 people have given it an average score of 3.42 out of 5.0, which is quite respectable.

Bottom line: If you have any interest in good beer, and you are able to do so, you really should try to make it down to Volo tonight. Maybe this will be the first in a series of casks making their way across the Atlantic for thirsty Ontario ale quaffers, but if not, won’t you be kicking yourself for missing out on this one?

This entry was posted in beer reviews and tagged cask ale, Fuller's, UK. Bookmark the permalink.