Beer of the Week – Chapeau Banana

Posted on July 31, 2007 by Greg Clow| Comments Off on Beer of the Week – Chapeau Banana 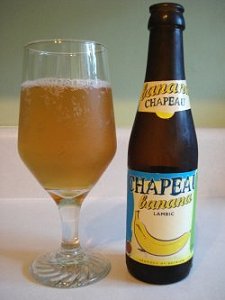 Once a rarity in Ontario, fruit beers have become more common and more popular in recent years, thanks in part to the LCBO’s summer beer promotions which generally spotlight several different fruit-flavoured offerings. These limited releases, as well as those fruit beers that can be found on shelves year round, usually feature such traditional flavours as raspberry (Framboise), cherry (Kriek) and peach (Pêche).

However, these seasonal releases have also featured strange brews that have elicited a hearty “what the HELL??!?” reaction from local beer aficionados. Past years have brought us several remarkably sweet beers from Florisgaarden, a low-alcohol flavoured beer line-up brewed by Belgium’s Brouwerij Huyghe. More recently, our benevolent provincial alcohol overlords have started carrying selections from Chapeau, an imprint used by another Belgian brewery, Brouwerij De Troch, for a series of fruit lambics that range from the traditional to the downright bizarre.

The Chapeau beer featured in this summer’s beer promotion, Chapeau Banana (LCBO 37853, $2.25/250 mL) most definitely falls into the latter category. Although oddly enough, it’s not the first banana-flavoured beer I’ve tried. That honour goes to Wells Banana Bread, a golden ale from England’s Wells & Youngs Brewery that smelled and tasted so much like it’s namesake loaf that it was uncanny, and frankly, a little frightening.

Chapeau Banana, however, is another thing entirely. This is partly because lambics are a unique style of beer created by using a spontaneous fermentation method where the brewing vessels are left open to the wild yeast and bacteria that are distinctive to the area of Belgium where they’re traditionally brewed. This imparts them with a one-of-a-kind flavour that is described as tart, funky and “barnyardy”. The addition of fruit to lambic is common, with sugar often added as well to take some of the edge off, but Chapeau/De Troch goes well beyond the usual Framboise, Kriek and Pêche options and brews with some very strange and unexpected fruits. Like banana.

Surprisingly, though, it kind of works. The aroma is a combination of those marshmellow banana candies I used to like as a kid (yeah, you know the ones I mean), mixed with a slight lambic funkiness. (My wife also found notes of strawberry, melon and kiwi.) The body is sticky, and not very refreshing, which is a common fault in sweetened fruit beers (or any overly sweetened drink, for that matter). The flavour is quite sweet off the top, although it tastes more like real banana than the candyish aroma suggests, and there’s a pleasant tartness peeking through in the finish.

So it’s not a complete disaster, but I’m still not quite sure I see the point of this beer and others like it. It’s too sweet to be refreshing on a hot day, and too weak at 3.5% to have serious appeal to the crowd who like to pound back high octane coolers and alcopops. But the LCBO keeps stocking a couple of examples of the style each summer, so there must be someone buying them, if only for the novelty value. The curious and the candy-addicted alike can find bottles now at select LCBO outlets.

This entry was posted in beer reviews and tagged Belgian ale, fruit beer. Bookmark the permalink.