Happy Anniversary to a True Original 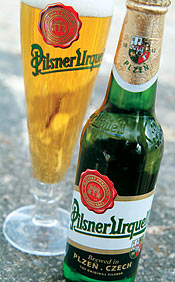 Tomorrow is Thanksgiving here in Canada, and I also took Friday off work, so I’m taking a bit of time this 4-day weekend to catch up on some blog reading. One thing I’ve just come across is Stephen Beaumont’s post to On The House last Monday where he mentions that October 4th (or maybe 5th) marked the 165th anniversary of the classic Czech lager Pilsner Urquell.

Here’s Stephen’s condensed version of the origin of the beer with the name that translates to “original source”:

Prior to the development of Pilsner Urquell in the town of Plzen in 1842, all beer consumed world-wide was dark in color. New malting techniques that yielded a golden hued grain, however, made it possible for an imported Bavarian brewer by the name of Josef Groll to develop a beer both light in color and crystal clear. (Beer from the Middle Ages is thought to have been quite murky, which made it hardly attractive in the new transparent crystal drinking vessels that had begun to appear.) That beer, still brewed as Pilsner Urquell, became spiritual father to all the golden lagers that followed, from Bitburger to Stella to Budweiser to Victory Prima Pils.

What Stephen doesn’t mention is why Josef Groll was brought to Plzen in the first place. Quite simply, the citizens of Plzen were pissed off about the poor quality of the dark, murky ale that was available to them, and they started dumping barrels of it in the town square to make their point. This lead the town leaders to build a new brewery, and then hire Groll to create a new beer for them using the lagering methods that had recently been refined by Bavarian brewers.

While his beer was an instant hit, Groll himself was reportedly quite difficult to deal with, and when his contract with the city expired in 1845, it was not renewed. He returned to Vilshofen, the town where he was born, and soon took over his father’s brewery. He remained in the same town until his death in 1887, which fittingly took place while drinking a beer in his local pub, Wolferstetter Keller.

Getting back to the beer itself: There are those who have been drinking longer than me who claim that Pilsner Urquell is no longer the beer it once was. Now owned by international giant SABMiller, the beer is no longer fermented in the traditional oak vessels but rather in modern stainless steel, a change that was made roughly 15 years ago. Production of the beer has also been expanded by brewing some in another SABMiller-owned facility in Poland.

Moves like this have angered purists, but to me, what’s important is whether or not the beer is any good. And to my palate, Pilsner Urquell is still a benchmark beer. Having never tried it before the move to steel fermentation tanks, I have no idea how today’s beer compares to the oak-fermented version, but it’s still one of my favourite lagers.

And the fact that something like 90% of the beer consumed in the world today is trying to emulate it (albeit, most of it doing so very poorly) must count for something, mustn’t it?

This entry was posted in Uncategorized and tagged lager, pilsner. Bookmark the permalink.

One Response to Happy Anniversary to a True Original