Ontario: Yours To Discover

Posted on November 14, 2007 by Greg Clow| Comments Off on Ontario: Yours To Discover 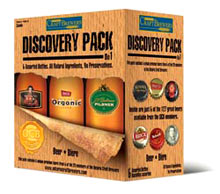 When the modern craft brewing movement took shape in the United States in the early 1980s, most of the new small breweries wanted to differentiate their products as much as possible from those of the big boys. And since the large breweries specialised in bland lagers, it only made sense that brewing more robust and full-bodied ales was a good way to establish a niche which has continued to grow, especially in the last few years.

Here in Ontario, though, things have gone a little differently. While a few of the province’s first wave of modern micro-breweries went the ale route (most notably Guelph’s Wellington Brewery), most of them stuck with lagers that were a slight step up from what Molson and Labatt were offering, but still fairly pedestrian when compared to what was happening south of the border.

Thankfully, things have improved somewhat in the years since then. Newer breweries like Mill Street, Church Key and Scotch Irish have come along with a variety of beers that would have been unimaginable even a decade ago, and veterans like Great Lakes that spent years riding the lager train have suddenly branched out into new and unexpected directions. Still, there are more than a couple of breweries in the ranks of the Ontario Craft Brewers that brew nothing but mainstream-leaning lagers – or if they do make ales, they’re cream or golden ales that appeal to pale lager drinkers.

It’s because of this dichotomy that I’m unsurprised but a bit disappointed with the just-released OCB Discovery Pack. As I noted on Taste T.O. last week, this sampler six-pack contains a half-dozen OCB brews – Mill Street Organic Lager, Great Lakes Red Leaf Lager, Wellington Special Pale Ale, Walkerville Amber Lager, Lakes of Muskoka Cream Ale and Brick J.R. Brickman Pilsner – that run the gamut from light lager to slightly darker lager, with a couple of pleasant but not overly challenging ales thrown in for good measure. As the somewhat volatile discussion thread on The Bar Towel shows, the beer geeks are not amused. Why not include a stout or porter, or an IPA, or even a brown ale?

But here’s the thing: This package wasn’t created with the beer geeks in mind. For one thing, there are likely too few of us to be a viable target market for what has reportedly been a time consuming and labour intensive project for the OCB and the LCBO. For another, we’re already loyal customers of many OCB products. So, who are they after? Well, if I may borrow a quote from Stephen Beaumont’s post on the pack, most likely “the major label drinker interested in trading up and the import lager consumer seeking to expand their beer horizons”.

And if that truly is the case, this package could prove to be a successful gamble. While the beers may not raise the interest of those of us who regularly singe our palates with hop bombs or the latest barrel-aged barley wine, Joe Sixpack or Jane Eurolager may be impressed by the brews without being intimidated by something that’s “too dark” or “too heavy” or “too weird”. And should they be the adventurous sort, the enclosed OCB Craft Beer Style List and the OCB website will help point them towards something a little more interesting.

It’s also worth noting that at the media event that took place a couple of weeks ago to preview the Discovery Pack, they were also pouring a number of less mainstream beers such as Scotch-Irish Black Irish Porter, Great Lakes Winter Ale and Mill Street Barley Wine in order to build some advance buzz for the seasonal beers promotion that will be starting soon at selected LCBOs. Combined with a presentation of party decor tips and a cooking and food pairing demo, it was obvious that the OCB is serious about reaching customers who may not be aware of the beers being brewed in their own backyards. And whether those customers are looking for something similar to their current macro brand, or something more unique and bold, they should be made aware that there’s an Ontario craft brewed beer for them.

OCB Discovery Pack No. 1 will very likely do a good job reaching the first group. Maybe the planned Pack No. 2 will start attracting the second one.

This entry was posted in beer industry and tagged lager, Ontario. Bookmark the permalink.