When I Asked For A "Microbrew", This Wasn't Quite What I Had In Mind…

Posted on December 1, 2007 by Greg Clow| Comments Off on When I Asked For A "Microbrew", This Wasn't Quite What I Had In Mind… 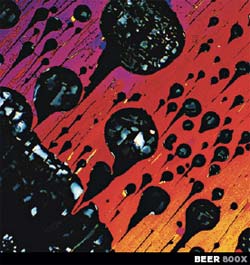 For their November, 2007 issue, Wired magazine asked biologist and photomicrographer Mike Davidson to take some microscopic images of a typical Thanksgiving feast.

Amongst the shots was the one on the right: an 800x magnification of beer. Or rather, beer in a slightly modified form:

After evaporating off most of the water from Bass Pale Ale, Davidson added hydrochloric acid to break down the beer’s complex carbohydrates. They formed the orange crystals; the black spots are voids with smaller crystallites inside.

This entry was posted in beer in the press. Bookmark the permalink.