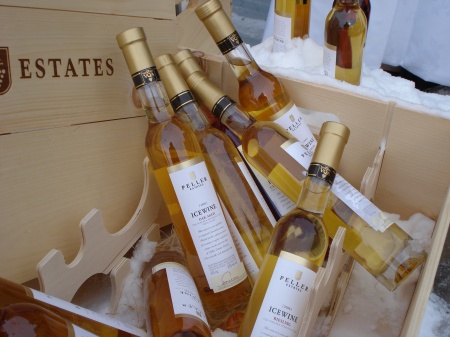 Last Saturday, my wife and I took a day trip. This may not seem like a big deal, but for two people with no driver licenses and two dogs, getting away together for a whole day is a rarity.

The occasion was a bus tour to the Niagara Icewine Festival, with visits to a couple of wineries as well, presented by the fine folks at the iYellow Wine Club. Even better, we got to go for free as media guests in order to research an article on iYellow and their tours for Taste T.O., making it well worth the nominal expense of hiring a dog-walker for the day.

For those who aren’t familiar with it, icewine is a sweet wine made with grapes that are left on the vine into the winter to allow them to freeze. This causes the water in the grapes to turn to ice, reducing the sugar and dissolved solids to a sweet, concentrated nectar, with barely a drop or two extractable from each grape. To be recognized as a real icewine under an agreement signed by Canada and Germany (the two main producers in the world), the temperature must fall to -8 Celsius or lower before the grapes are harvested, which means that warm winters lead to small icewine harvests as the grapes rot or get eaten by animals before they can be picked. All of which explains why even the cheaper icewines sell for $30 or more per 375 ml bottle. 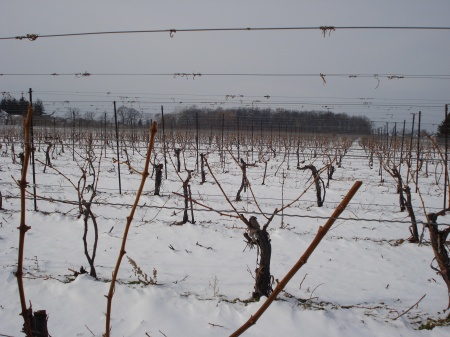 The first stop of the day was Peller Estates, one of a number of wineries (plus Granville Island Brewery) owned by Andrew Peller Limited. The parent company operates wineries that produce vino ranging in quality from plonk to premium, and Peller Estates definitely falls into the higher quality end of their portfolio. The winery complex is huge and swank, featuring a fine dining restaurant, exclusive tasting rooms, a large wine and gift shop, and everything else you’d expect from a successful multi-million dollar company that makes some pretty damn good wines.

After a trek into the vineyards behind the building to see the vines that were recently plucked of their sweet and icy payload, we were led to the Reserve Boutique Tasting Room (ooh la la!) and served samples of Peller’s three icewines: 2006 Riesling, 2005 Oak-Aged Vidal Blanc and 2006 Cabernet Franc (the latter being the first red icewine I’d ever tried). The guide leading the session taught us a bit about tasting icewines, including how to aerate it on your tongue, which reveals a lot more of the acidity that helps balance the aggressive sweetness that hits you off the top. It was very interesting, sort of like learning how to find the hops in a sweet, malt-forward barley wine or eisbock. 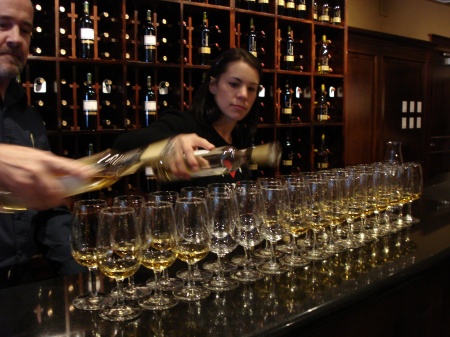 Next, we were off to Niagara-on-the-Lake, a quaint tourist town that is just too frickin’ cute for words. It’s been a popular destination for many years due to attractions like the Shaw Festival and the Victorian-themed Old Town area, and like the rest of the Niagara region, the booming success of Ontario’s wineries has brought even more tourism dollars into the town.

The tour group was left to fend for ourselves for lunch, and Sheryl and I ended up at the Irish Harp Pub, which was a cozy and cheerful place with an Irish owner, good food, a moderately interesting tap list, and no TVs (always a plus, IMO). I had a pint of one of their house beers, Irish Harp Red, which I suspect is a rebranded version of Taps Red Cream Ale since it was served to me in a Taps glass, and the brewery is just a few minutes away from the pub. Not the most complex beer, but a nice enough quaff to go with lunch, which was a very good steak and mushroom pie served with side of champ, aka the best goddamn mashed potatoes I’ve ever eaten. Sheryl’s fish & chips were also excellent, and authentically came with a side of mushy peas, which you don’t see often around here. 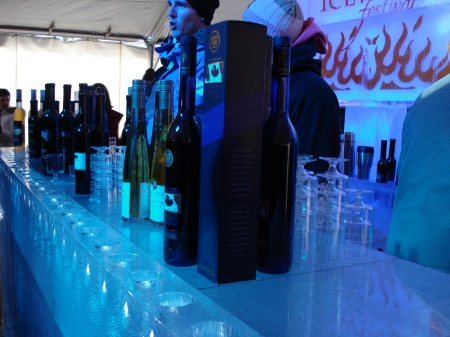 Then it was off to the main event: the Icewine Lounge, which was an icewine tasting tent located on a blocked-off street in Old Town, complete with a bar and tables made of ice. This ended up being the letdown of the day for a number of reasons. The promised “20 foot ice bar” was actually two smaller bars placed back-to-back, which meant the folks pouring the wine were crammed closely together, and the crowd around the bar was 3 or 4 deep while the rest of the large tent was nearly empty. We were also pretty shocked to find that the samples were 5 bucks a pop. (Yeah, I know I said above that this stuff is expensive, but these were some pretty small samples.) So after a couple of tastes each, we decided to spend the rest of our time browsing in the shops along Queen Street before heading back to the bus. 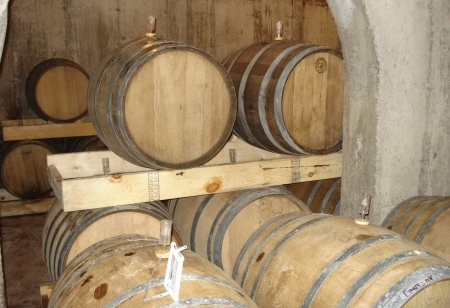 The final stop for the day was Lailey Vineyard, a small family-owned winery that provided quite a contrast to the massive Peller complex we visited earlier in the day. The place reminded me of a lot of the microbreweries I’ve visited, from the small bank of fermentation tanks and hand-bottling machine, to the friendly and enthusiastic tour and tasting guide.

To start, we checked out the barrel cellar and had a cloudy sample of the still-fermenting 2007 Chardonnay which was, to be honest, pretty disgusting, but I blame that on the yeast, not the wine. Much more enjoyable were the finished wines that we sampled back in the winery’s tasting room. The 2006 Sauvignon Blanc and 2005 Chardonnay were pleasant, but as a red wine fan, I was much more taken by the 2006 Syrah and 2005 Cabernet. And to get back to the main theme of the day, we wrapped up with the 2005 Vidal icewine. 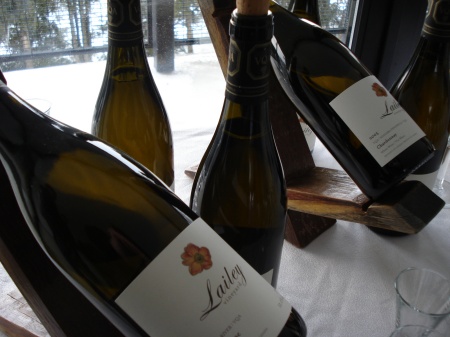 Being a wine newbie, I didn’t take any tasting notes about these or any other wines that we sampled through the day, but aside from the under-fermented Chardonnay, I was impressed by pretty much everything I tried at all of our destinations. And aside from the slight disappointment of the Icewine Lounge, it was a really enjoyable day. Ange and Pax of iYellow (pictured below) have got a good thing going on with these tours, and we might even look into going on another one when they start them up again in the spring. 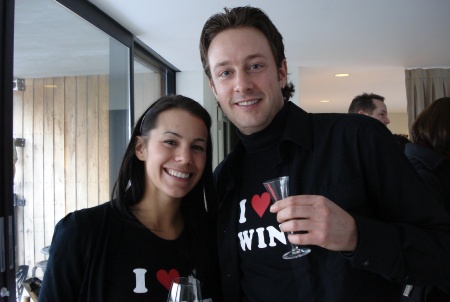 (Photos by my lovely & talented wife, who is much better with a camera than I am.)

This entry was posted in travel, wine and tagged Ontario. Bookmark the permalink.