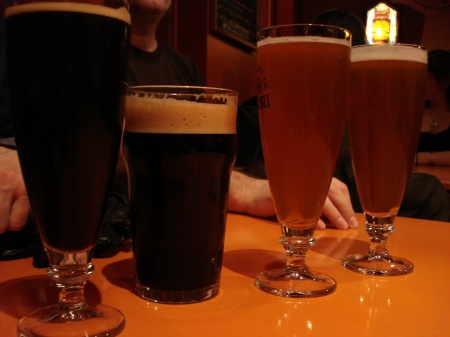 I’ve only visited Montreal a few times, but two of those visits have played a pretty big role in increasing my interest in craft beer.

The first time was in 2000, when I attended the first instalment of MUTEK, an electronic music and arts festival that is held there every May. My time there happened to coincide with Mondial de la BiÃ¨re, Montreal’s renowned beer festival, so I headed down to check it out one afternoon. I had always been a microbrew drinker, and enjoyed trying new brews here and there, but Mondial exposed me to beers and styles that I’d never heard of, let alone tried before, and it inspired me to expand my beer horizons once I returned home. Still, it remained more of a casual interest than the obsession it has since become.

It was my next visit just over two years later that helped push me over the edge. I headed there with a friend primarily to represent Piehead Records, a small record label that my wife and I were running at the time, at a concert by three artists we had signed. But we also spent a lot of our weekend visiting some of Montreal’s brewpubs and beer bars – including the now semi-legendary Dieu Du Ciel! – and we came back with a trunk full of weird and wonderful Quebecois beers. A couple of weeks later, I discovered RateBeer, and the inevitable slide into complete beer geekdom soon followed.

Last weekend, I finally made a long overdue return visit to Montreal with three of my regular beer pals, and the focus of the trip was beer, beer and more beer. Hell, we even stayed in the apartment above Dieu Du Ciel!, so you know that we were serious. 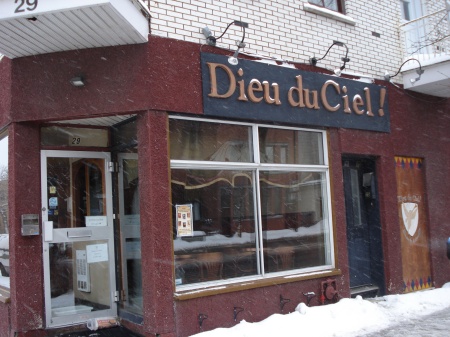 Aside from some messy traffic on the way into the city proper, the drive to Montreal was pretty uneventful, and we arrived in the late afternoon – perfect timing, since most bars in Montreal seem to open at 3 PM (or as they call it, “15 heures”) . After a quick unloading of the car, we retired to Dieu Du Ciel! (29 Laurier ouest) for a pint or two to get us primed for the weekend. In the 5+ years since my last visit, the reputation of DDC! has grown immensely, most notably due to the deserved success of their imperial coffee stout PÃ©chÃ© Mortel, but also due to their willingness to constantly experiment with new brews in new styles. During our visit, their 15 taps included several Belgian ales, two stouts, an IPA, an American Pale, a Barley Wine, a Saison, an Alt, a KÃ¶lsch, two unique and distinct wheat beers, and more. While I haven’t travelled enough to make a definitive statement of fact, I think it’s a fairly safe bet to say that DDC! is one of the best brewpubs in Canada, if not all of North America. 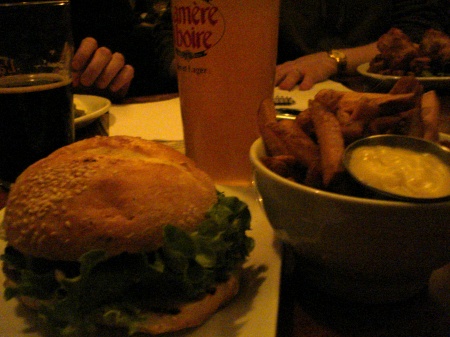 Still, there’s more to Montreal than DDC!, so we headed downtown for dinner and some pub-crawling. First on the itinerary was L’AmÃ¨re Ã  Boire (2049 St-Denis), a three-level brewpub and restaurant with a very open, loft-like feel. For some reason, it struck me as the sort of place that would attract a mature and intellectual college crowd. The food was better-than-average pub grub with nice presentation, and the beer was quite impressive all around. They specialise in German- and Czech-style lagers, such as their Cerna Hora Pilsener and Vollbier Vienna, although they know their way around an ale as well, with their Imperial Stout and Boucanier Porter (the latter on cask) both being excellent. 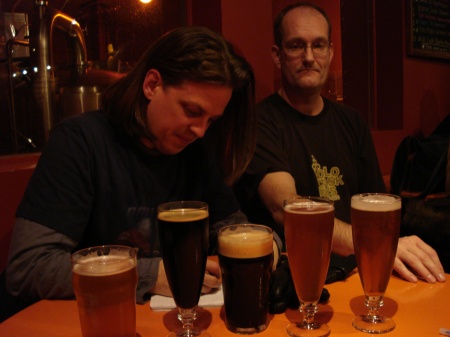 We were joined at L’AmÃ¨re by local RateBeerian Dany (aka Glouglouburp) who led us to our next destination, Le Saint-Bock (1749 St-Denis). A combination brewpub and beer bar, they’ve been open for just over a year, but the comfortable, grotto-like space feels like it’s been in use for much longer. Dany recommended that we eschew the house beers in favour of a few of the guest tap offerings, so we took his advice and ended up with some pretty excellent choices including Les Trois Mousquetaires 1870 Baltic Porter (one of my favourites of the whole trip) and Hopfenstark Saison Station 55 (a unique Saison-IPA hybrid). 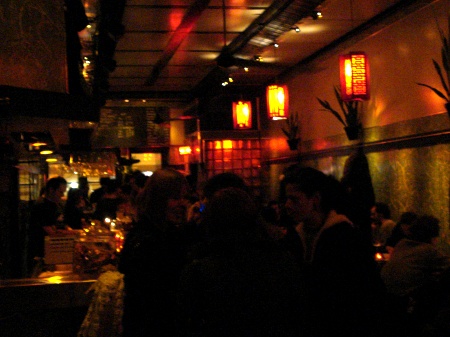 On our way our of St-Bock, we stumbled across another pal from RateBeer who I know only by his RB handle, Goldorak, and he joined our increasingly inebriated crew as we headed to Le Cheval Blanc (809 Ontario est). Open since 1986 – making them Montreal’s oldest brewpub – they’re known to many via the bottled Cheval Blanc beers of varying quality brewed by Brasseurs RJ under a licensing deal. But from most accounts, the beers brewed on-site at the artsy tavern tend to of a higher standard. Being half in the bag by the time we got there, none of us were in any condition to make any serious judgements, but the Imperial IPA and Barley Wine that we were served seemed to be enjoyed and appreciated by all.

By this point, it had been several hours and many beers since dinner, so it was unanimously decided that some food was in order. And when you’re in Montreal, and it’s late, and you’re drunk and hungry, there’s really only one acceptable option: Poutine! Once little-known outside of Quebec, this classic comfort food dish of French fries topped with cheese curds and gravy is now common across Canada and even into some American cities, although the curds are sometimes replaced with grated cheese or cheese sauce, which just won’t do for poutine purists. For the real deal, it’s curds or nothing. 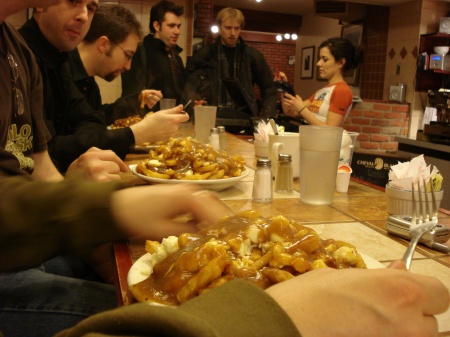 Like any local delicacy, it’s always best to let a native take the lead, and one of the Montrealers in our group knew of a place just a couple of blocks from Dieu Du Ciel!, so we hopped a cab and headed up to Chez Claudette (351 Laurier est). As promised, they served some killer poutine, including some traditional and not-so-traditional variations. I ordered a version called “Pata-Chou” with cole slaw on top – not something I could imagine ordering in a sober state, but it was surprisingly tasty. And of course, I ended up with the nickname “Pata-Chou” for the rest of the weekend. 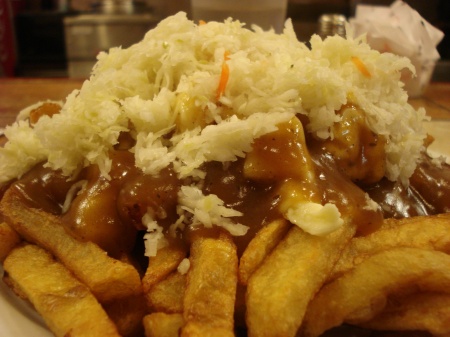 Plates cleaned of grease and fat, we trekked back to Dieu Du Ciel!, and while there was some initial interest in continuing the drinking, and long day of travel started to catch up with us, so we bid adieu to our tour guides and headed upstairs to bed. (Did I mention how awesome it was to stay upstairs from the pub?)

And 1100 words is enough from now, so the story of Saturday will have to wait for another post.

This entry was posted in bars & pubs, brewpubs, travel and tagged Montreal, Quebec. Bookmark the permalink.