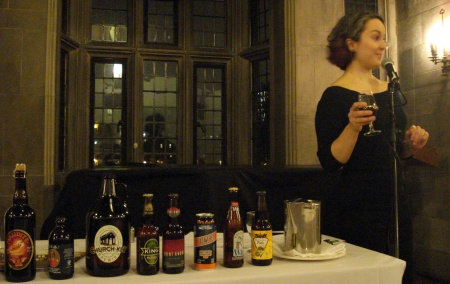 Last Thursday night, Hart House on the University of Toronto campus presented their first (and hopefully not last) Beer Academy event hosted by Mirella Amato, a woman who is a relatively new face in Toronto’s beer scene, but a very knowledgeable one.

As each sample was served, Mirella spoke a bit about the style and the brewery, and also touched on more general beer-related topics (history, ingredients, etc.) between each sample.

All attendees were also given an info sheet with a bit of info about each beer, including availability (LCBO, Beer Store, brewery) and some suggested food pairings. To help with the latter, the second part of the night featured a casual buffet reception, with more of all of the beers and hors d’oeuvre sized servings of the following tasty treats:

The food and drink events at Hart House are known for having a heavy focus on wine, with little or no attention paid to beer (I recall being offered two or three macrobrews as my only beer options at a holiday lunch there last year), so this event was a good step forward for them. Hopefully, it will spin off and improve their everyday beer offerings, as well as inspiring future beer-related events.

It’s also worth noting that Mirella has just launched the website for Beerology, the umbrella name for her various beer-related pursuits such as writing for various publications (including TAPS), presenting the beer programming on the streaming video website Legourmet.tv, and of course, hosting guided beer tastings. Keep an eye on the site to find out what she’ll be up to next.

This entry was posted in beer events, food and tagged Ontario. Bookmark the permalink.

One Response to Beer Academy at Hart House