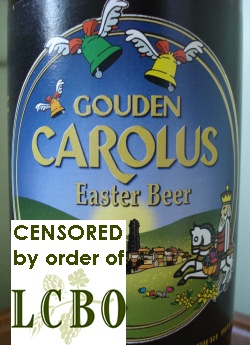 Like most government-run liquor boards, Ontario’s LCBO has their fair share of rules and regulations that producers and agents have to follow in order to get their products into the system. Some of them have at least a semblance of logic, such as ensuring that the alcohol percentage on the label matches that of the liquid in the bottle, but a lot of them elicit an incredulous “WTF?” reaction from me, and presumably many other people.

For example, there is a policy that any graphics that might be appealing to children are not allowed to appear on the packaging of alcoholic beverages in Ontario. Now, I find this policy to be pretty ridiculous, which is how I feel about most overly restrictive laws and policies of the “Who will think of the CHILDREN???” sort. But if I put myself into the nanny state mindset for just a moment, I suppose I can see the reasoning of such a policy when it comes to products that are sold at LCBO retail outlets, since they might purchased and brought in the homes of irresponsible parents who leave their liquor in a place accessible to their kids.

What I absolutely cannot understand, however, is why this same policy applies to products that are not in LCBO stores, and are only available via consignment orders directly from import agents. The vast majority of these products – such as the Gouden Carolus Easter Beer pictured here – are sold to the bar and restaurant trade, where they should never be accessible to anyone under the age of 19. Yet the LCBOverlords ordered that the label on every bottle of this beer had to be defaced with a sticker before they were shipped out to the handful of establishments that ordered it via import agents Roland + Russell.

(By the way – if you’re curious to see the offending image that needed to be censored, just click on the photo.)

Anyway, government red tape and label defacement aside, I suppose we should at least be happy that Gouden Carolus Easter Beer is available to Ontarians at all. It’s one of the few Easter beers brewed anywhere (according to RateBeer, there are barely two dozen beers in the world with the word “Easter” in their name), and given the generally high quality of the Gouden Carolus line-up, it’s bound to be a good one.

I’ve actually got a bottle courtesy of R+R, but it’s set aside to share with some friends at a beer tasting later this week (none of which are children, I promise!), and my review will pop up on RateBeer soon afterwards. In the meantime, Happy Easter!