Posted on April 18, 2008 by Greg Clow| Comments Off on Bavaria/Koningshoeven Beer Dinner

This past Tuesday evening, the unofficial Month Of Beer Dinners continued with a dinner at the website-less Abbot On The Hill that featured three courses paired with beers from the Dutch breweries Bavaria and Koningshoeven.

I must admit that when I first heard about this dinner, I was a bit confused by the beer selections. Aside from the fact that both breweries are Dutch and are repped in Canada by Premier Brands, I couldn’t see much in common between a large (albeit family-run) brewery that specialises in mainstream lagers, and a small abbey brewery that produces Trappist ales. But as we learned during a talk by Daan Bastijn, president of Bavaria’s North American office in Atlanta, there is a connection between the two, as Bavaria took over the operations of the Koningshoeven brewery in 1999 in order to assist the aging monks in the production of the beer. This arrangement led to Koningshoeven losing the rights to use the official Trappist beer logo for several years, although when the contract was renewed in 2004, Bavaria stepped back into more of an arms-length role, and their official Trappist status was revived in 2005.

(Oh, and by the way, i forgot my camera and had to use my phone to take the photos in this post. Which explains why they’re even shittier than usual.) 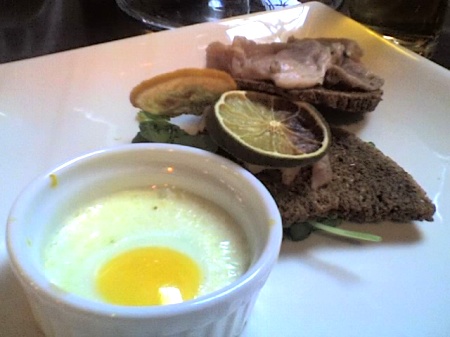 When I first saw the menu a couple of weeks ago, I had no idea what a “shirred” egg was, so I looked it up before the dinner and found that it refers to an egg that is broiled or baked in a small dish. The description also warned that “the eggs may become tough and rubbery if cooked too long”, and that’s unfortunately what happened to mine – despite the bright yellow top of the yolk suggesting it would be soft and runny, the interior was hard and mealy, like a hard-boiled egg that had cooked too long.

At least the tuna was well prepared, with a nice tanginess from the citrus marinade, but the pumpernickel seemed like an odd bread to serve it on – the strong, earthy flavour tended to overpower the more subtle flavour of the fish. On their own, though, they were both tasty.

As for the beer pairing, you’d really be hard pressed to find a food that Barvaria doesn’t go with, since it’s such a clean and simple lager. It has a honeyish malt character, with some lemon notes in the middle (which made it a good match for the fish, now that I think of it), and some light herbal hops to finish. Nothing to write home about, but not awful either. 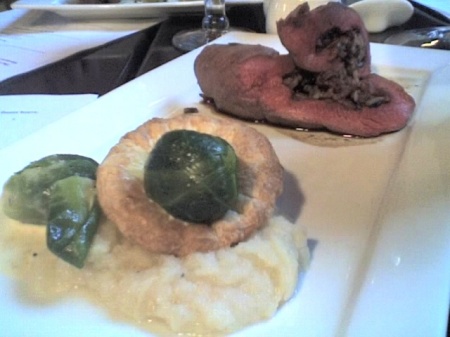 After a shaky starter, this was a killer main course. The venison was prepared nice and rare, just the way I like it, and the stuffing and demi-glace beautifully complimented the slightly gamey flavour of the meat. The veggies were very nicely done as well, although as a big fan of Brussels sprouts, I could’ve done with more than two on the plate.

And for the main event, we were treated to what was apparently the first ever appearance of Koningshoeven Bock on draught in the Western hemisphere. Premier Brands brought in two kegs of this seasonal rarity, and one was tapped for the dinner. It’s a very unique beer – since it’s top-fermented, it has a strong Trappist ale character, but also the caramel malt and roast notes expected from a bock. It paired well with the meat, and was enjoyable enough for me to polish off a couple more glasses after the dinner wrapped up. 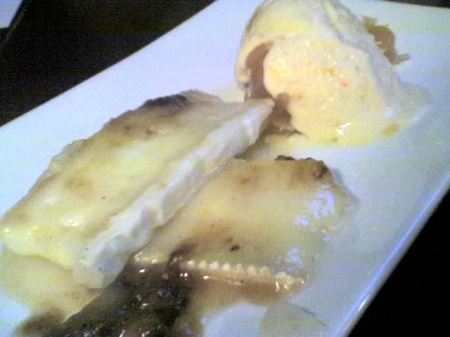 I was sceptical about this dessert – “sugar fried brie” sounded a bit bizarre to me – but it was actually pretty damn good, with the caramelised sugar and gooey cheese meshing very nicely. The ice cream was also a potential disaster, but the contrast between the cold, sweet flavour and the back-of-the-throat chili heat made it a winner.

The beer pairing here was an obvious one to make, as the rich, fruity, spicy Quad goes well with most desserts and many cheeses. No complaints here.

So, slightly disappointing starter aside, this was another successful beer dinner. Thanks for Premier and the Abbot for putting it on, and especially for bringing in the bock. For beerhunters in Toronto, the Abbot got both kegs, and it was still available as of last night, so head over soon if you want a taste of this rare treat.