Don't Put That In Your Mouth, You Don't Know Where It's Been!

Posted on November 24, 2008 by Greg Clow| Comments Off on Don't Put That In Your Mouth, You Don't Know Where It's Been!

Catching up on some blog reading recently, I came across posts from Jay Brooks and Stephen Beaumont regarding The Omnivore’s 100, a list of 100 food items – some really weird, some not so much – that bloggers are supposed to post their blogs, bolding items that they’ve eaten and crossing out items that they’d never consider eating.

Since I ate bull testicles (which are notably missing from this list, I might add) for the first time last week, I thought it would be fun to find out my results: 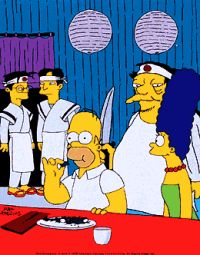 * It was actually alligator. But close enough.

** Never been much of a congac drinker, but back when I occasionally smoked cigars, I’d often pair one with a nice bourbon or big, peaty single malt scotch. So again, close enough.

*** I had to look this one up. According to Wikipedia, Kaolin is a mineral which was “the active substance of anti-diarrhea medicine Kaopectate” until the early 1990s. I can’t remember if I used Kaopectate before that point or not, so I’ll count it as half.

**** I don’t think Hostess Fruit Pies were ever available in Canada, as we had a different Hostess company up here that made potato chips. But I ate plenty of Vachon snack pies and cakes as a kid, which was sort of the Canadian equivalent. I’ll take a half-point here as well.

So my total is 80 out of 100. Not bad! And none of the remainder that I’d absolutely never try. (Well, roadkill isn’t exactly at the top of my “must try” list, but as Stephen said in his post, “you just never know”…)

This entry was posted in blogs & websites, food. Bookmark the permalink.