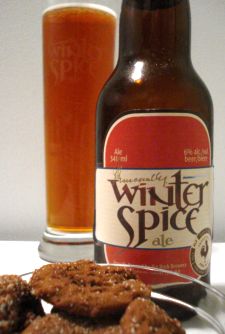 At the trade & media launch for Fuller’s Chiswick Bitter last Saturday, I was chatting with Stephen Beaumont & Bill White, and being close to the holiday season, the conversation naturally turned to Christmas beers – or rather, the depressingly small number of them that are available here in Ontario.

The LCBO‘s current Winter Warmers promotion includes a couple, including Great Lakes Winter Ale and Samichlaus. A couple more are available from Ontario breweries, such as Grand River Jubilation and Barley Days Yuletide Cherry Porter, although these are often limited in distribution to draught or direct brewery sales. But considering that there are dozens, if not hundreds, of Christmas and holiday beers available out there, it’s unfortunate that the LCBO once again limits us to such a small selection of choices.

One of those beers not available here is McNallyâ€™s Winter Spice Ale, the new winter seasonal from Calgary’s Big Rock Brewery. Distribution is limited to the four western-most provinces, but they were kind enough to send me some for review in the form of the holiday gift set with includes four bottles of the Ale, two branded glasses, and a small package of bite-sized ginger cookies from Cookie Occasion, a gourmet family bakery in Calgary.

The cookies were a very nice touch, and it would be great to see more breweries putting such tasty treats into their gift packs. There’s a place called Northern Confections that makes peanut brittle with Steam Whistle, which would be a natural addition to their cases, and bottles of the new Innis & Gunn Rum Cask Aged Ale were sent out to media along with a small box of rum truffles, so why not include them with the retail version as well?

As for the beer, my only real complaint was that the body is on the light side for what is ostensibly a winter warmer, but otherwise, I’m pretty happy with it. The spices used in the brew – ginger, cinnamon, clove and nutmeg – all come across in the aroma and flavour, and the beer also has a pleasantly sweet maltiness to balance out the spices. Similarly, the cookies had a nice tingly kick from the ginger, but had a healthy dose of molasses as well. Great on their own, and pretty nice with the beer as well.

Big Rock has pretty decent market penetration in Ontario for many of their other beers, so I wouldn’t be surprised if this one shows up next year as one of the LCBO’s usually decent selection of beer holiday gift packs. In the meantime, I guess I’ll be spending my holidays making do with the handful of Christmas beers we’ve got while reading Don Russell‘s Christmas Beer and being very jealous of all you non-Ontarians who can actually buy most of the beers in the book.

This entry was posted in food and tagged Christmas, spiced. Bookmark the permalink.