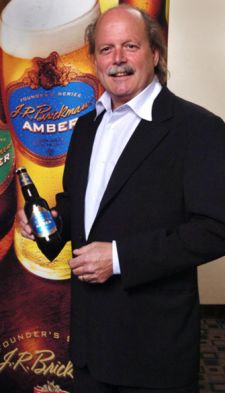 The guy in the photo on the right is named Jim Brickman. Way back in 1984, he founded a brewery in Waterloo, Ontario called Brick. He probably doesn’t know it, but he and his brewery are the main reasons I became a craft beer drinker.

This may sound strange to younger folks who are only familiar with the Brick of today: a brewery known mainly for their “buck-a-beer” Laker brand along with a bland mainstream lager (Red Baron), a bland dark lager (Waterloo Dark), and a bland retro-ale (Red Cap). But as I briefly noted in the first post on this blog, during the couple of years I attended the University of Waterloo in the mid/late-1980s, Brick (along with Sleeman and Wellington in nearby Guelph) was an early pioneer of microbrewing in Ontario.

Brick’s line-up of beers wasn’t extensive at the time – just two, or maybe three brands – and in keeping with the German heritage of the Kitchener-Waterloo area, it concentrated on lagers. But they were lagers that were actual relatively flavourful and distinct from the standard Labatt, Molson and Carling O’Keefe beers that had been the only option for beer drinkers in the previously few decades.

I can’t claim that I didn’t drink my fair share of mass produced suds back then. I recall having a strange fondness for Molson Golden (which was an ale, at least), and like most black-clad punk/goth/alternative club-goers of the time, Carling Black Label became part of my uniform for a couple of years. But early on in my drinking career, I discovered Brick Lager and Red Baron, and they kick-started my interest in trying other microbrews and imports.

Through the 1990s, Brick remained at the forefront of Ontario’s craft brewing scene. Their core line-up expanded to include Waterloo Dark and several other lagers; they rescued the brands of short-lived small breweries such as Algonquin, Formosa and Conners; and they signed deals to contract brew such renowned international brands as Andechs Spezial Hell, Henninger Pils and Celis White, the latter being the first Belgian-style witbier I ever tasted. And let’s not forget Brick Anniversary Bock, an annual offering through the late 1980s and most of the 1990s that remains one of the best beers ever brewed in Ontario.

But then, a few years ago, things started to change, as Brick seemingly decided that market share was more important than product quality and diversity. The international brands all disappeared, as did most of the smaller brands they had purchased over the years, and the Anniversary Bock was discontinued. The Laker discount brand purchased from Molson in the late 1990s became a bigger part of their portfolio, alongside an array of undistinguished and indistinguishable pale lagers being sold under the Brick banner. Aside from cracking an occasional Red Baron or Waterloo Dark for nostaligic reasons, I pretty much stopped paying attention to Brick at this point, as the beers they were brewing obviously weren’t being made with craft beer drinkers in mind.

It’s probably no coincidence that during this same time period, Brickman’s role at the increasingly corporate brewery seemed to diminish. He was replaced as President and CEO in 2004, and while he retained the title of Executive Chairman and remained the public face of the brewery, it was clear that decisions on what brands to brew and what ones to cull were pretty much out of his hands, with the board being more interested in increasing share value than satisfying adventurous beer drinkers. 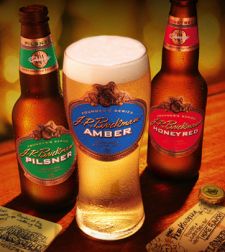 Things took a slight turn for the better a couple of years ago, when most of the Brick brands were killed off and replaced with the J.R. Brickman Founders Series, a trio of beers that seemed to be intended to return Brick to its craft brewing roots. Some claimed that the brews – Pilsner, Amber and Honey Red – were simply rebrandings of the discontinued Brick brands, but to my palate, they seemed to have a fresher and more flavourful character, with the Pilsner being especially impressive. Sadly, though, the quality hasn’t been consistent, with a can of the Pilsner I tried back in July being especially poor, suggesting that corners are now being cut on what was originally intended to be a line-up of premium beers.

And now, as Brick is about to enter it’s 25th year, there comes another blow: Jim Brickman has left the brewery. The announcement came with little fanfare in a press release last week, buried beneath the quarterly financial statements. There was no direct quote from Brickman, just a brief notice that “Jim Brickman has provided his notice of retirement to the Company which the Company has accepted effective immediately”, followed by the typically corporate quote from President & CEO George Croft stating that “The Company appreciates the significant contribution Jim Brickman has made to Brick Brewing since founding it in 1984”.

There has been no subsequent statement from Brickman giving details regarding the reasons or circumstances of his departure, and I don’t want to get wrapped up in any conjecture, aside from noting that “retirements” that are “effective immediately” are rarely amicable ones. But even if this one is, it’s still a sad day. Yeah, Brick will continue making beer, and Jim Brickman may pop up somewhere else, but it’s still the end of an era in Ontario’s – and Canada’s – brewing industry.

Cheers, Jim. And thanks.

This entry was posted in beer industry, beer people and tagged Canada, Ontario. Bookmark the permalink.