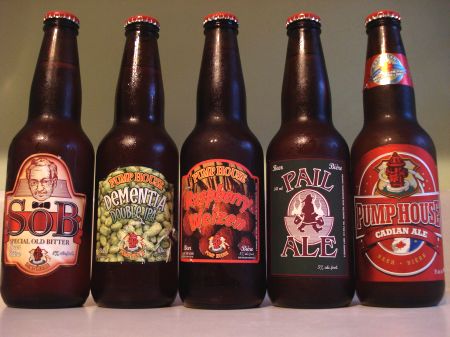 One thing that I’m going to try and do more of in ’09 and beyond is posting beer review features here on the ol’ blog. As a beer rating whore, I’m taking & typing up notes for all of the new beers I try, anyway (although I’ve currently got about half a notebook full that need to get entered). So while I won’t be posting here about every single beer I tip back, I’ll be aiming to do themed posts when I get a number of beers in the same style, or from the same brewery, etc.

Which brings us to this li’l round-up of five beers fromÂ  Pump House Brewery. My exposure to the beers from this New Brunswick brewery has been fairly limited, since only their Blueberry Ale has ever been available in Ontario, and even that was quite limited. But when the lovely and talented brewmaster Greg Nash headed there after being turfed from Garrison Brewing in Halifax, I made a point of trying to get my hands on more of their brews, and soon lucked into the five pictured above.

I actually received and drank all of these beers a few months ago, but I just came across the photo that I took of them back then, obviously with the intention of doing a post like this one. And thanks to the magic of RateBeer, I can cobble one together now:

Pump House Special Old Bitter (S.O.B.)
Caramel-amber colour with a small off-white head. Aroma and flavour are both quite hop-forward, with strong grapefruit notes, and a sweet malt backing – simple, but very good. Medium bodied, and quite sessionable.

Pump House Raspberry Weizen
Dark pink-amber with a minimal light pink head. Aroma and flavour are all about the raspberry – big and fresh, and really, really tart. Completely one-dimensional, but if you like raspberries (which I do), that one dimension is a really good one.

Pump House Cadian Cream Ale
Light gold colour. Sweet & grassy malt aroma. Light body. More sweetness in the flavour, with a bit of honey & orange. Not much bitterness in the finish. The most mainstream – and most disappointing – of the bunch.

2 Responses to Pimpin' For Pump House