Posted on May 27, 2009 by Greg Clow| Comments Off on Back with Brockton

More than a month between posts. So what else is new?

As always, I’ve been plenty busy elsewhere, and there will be more on that in another post soon. (No, really!) But in the meantime, I need to post this long overdue review, since the kind folks at Granville Island were nice enough to send me some samples of their latest brew, and other people got their reviews posted a long time ago, making me look like some sort of deadbeat. 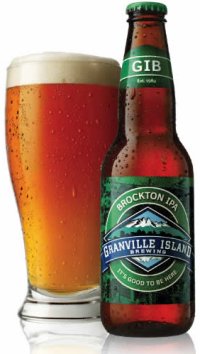 So: Granville Island Brockton IPA. It’s a 25th anniversary beer from a BC brewery that, to be perfectly frank, has not impressed me much in the past. Although to be fair, I’ve only tried four of their beers, and have no idea how old they might’ve been by the time they reached me.

This beer, though, I liked quite a bit. It’s got a lovely orange-amber colour with an ample white head, and an inviting aroma that’s a bit floral & a bit citrusy on the hop side of things, and moderately sweet and caramelly on the malt side. Flavour is masterfully balanced, with a solid, not-too-sweet malt backbone, and a zip of citric hops in the finish. All told, it really reminds me more of a UK-style IPA than a North American West Coast one.

Which brings me to my main complaint about this beer: the slogan, “Finally, a West Coast IPA”, suggests that Brockton is gonna be a big ol’ hop bomb, but it’s not, and that’s caused disappointment with some of the Raters and Advocates. And as a bit of a hophead myself, I must confess to feeling a little let down with I took my first few sips. But once I accepted it as the solid and sessionable beer that it is, I quickly got over it.

A thumbs up from me for the Brockton IPA, then. And a promise to myself that I’ll try and give some of their other beers another shot.

This entry was posted in beer reviews and tagged Canada, IPA. Bookmark the permalink.