Due to the unique (or in less politically correct terms, fucked up) nature of alcohol legislation in Ontario, there are several different ways for beer to enter the marketplace. There are two retail chains – the government-owned LCBO, and the Molson & Labatt owned Beer Store – but getting on the shelves of the former requires approval by the powers-that-be, while listings at the latter are quite expensive.

Because of the time, money and/or red tape involved in getting beers into the province’s retail market, much of the beer imported into Ontario, especially from smaller breweries, is sold straight to bars, restaurants and individuals by import agents via the LCBO’s Private Order and Consignment programs. The result of this is a larger selection of beers being available than store stock suggests, but beer hunters often have to be intrepid to track them down, especially the lesser known beers that are brought in for specific ethnic communities, and that end up at bars and restaurants that aren’t necessarily known for having varied beer selections. 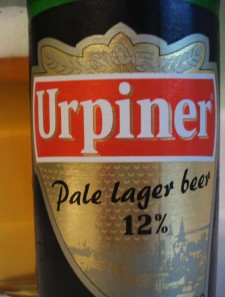 It helps, of course, when the importers do some outreach to try and spread the word about their goods. An example of this is an email I received a few weeks ago from James Tubaro of Oxford Imports, an agency that usually deals with wine, but that recently started carrying Urpiner LeÅ¾iak SvetlÃ½, a pilsner from Slovakia’s Banskobystricky Brewery. He dropped off a few bottles for me soon after, and while drinking the final one tonight, I thought I should share some thoughts on it.

My main thought is that it’s a pretty nice beer, comparable to many of the European pilsners that are easily available at the LCBO. It has a beautiful golden colour and a snow white head, and an aroma that’s a touch too sweet for the style, but with a nice bready character and a herbal hop edge. The flavour is very pleasant – fresh bread, some toasted grain, a hint of honey, and very nice, lingering herbal hops in the finish. Again, itâ€™s a bit on the sweet side for a pils, but still a nice little brew.

Tubaro tells me that he’s submitted the beer to the LCBO for retail consideration, so perhaps it will some day join Golden Pheasant on the shelves to make a grand total of two Slovakian beers easily available to Ontario drinkers. For now, though, he’s got it in a number of bars and restaurants around Toronto. So be alert, beer hunters.

(PS: For those who are curious, the “12%” on the label isn’t the alcohol percentage. It represents 12Â° on the Plato scale, a measurement that I don’t completely understand, but which seems to be commonly used by Eastern European breweries. As far as ABV goes, it’s a perfectly reasonable 5%.)

This entry was posted in beer reviews and tagged lager, pilsner. Bookmark the permalink.