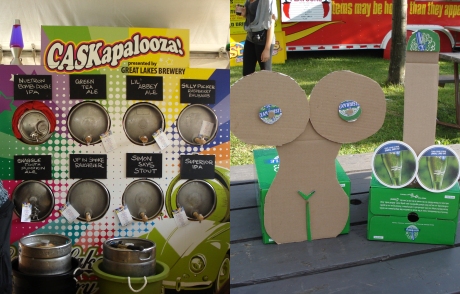 LEFT: One of the few reasons that Toronto's Festival of Beer doesn't completely suck - RIGHT: Two of the many, many reasons that it mostly does suck

Several years ago, I accepted that I’m not in the target market for Toronto’s Festival of Beer. Despite assurances in the program that the event caters to the “beer enthusiast” with “an astute palate”, it really is a ridiculously overpriced celebration of swill that is oriented more and more towards fratboys and douchebags every year. From the stupid “hats” made out of six-pack boxes being handed out by Steam Whistle (seriously, folks – penises and boobies? Are you all in Grade 5 or something?), to the booth girls who are hired based on their breast cleavage rather than their beer knowledge, to the massive and obnoxious “Brand Experience Areas” offering such fine beverages as Budweiser and Tecate, the Festival manages to represent pretty much everything that is offensive and embarrassing about the mainstream beer market.

That said, I still take up the offer of a media pass every year and go check it out, and I always manage to find at least a couple of things that save my visit from being a complete waste of time. Here, then, are my five reasons why this year’s Festival wasn’t a total write-off…

1) Great Lakes Caskapalooza!
Truth be told, I was considering skipping the Festival entirely this year, even with a free pass being available. But when Great Lakes Brewery announced a few days ago that they’d be bringing 20(!) one-off casks, I knew I had to be there. Their fancy refrigerated wall o’ casks allowed them to have up to eight on tap at a time, and I went through most of the wall when I was there on Thursday, with all of them impressing me in one way or another. Simon Says Stout might be a little light for some, but it was a good sessionable stout; Neutron Bomb Double IPA was one of the hoppiest Ontario brewed beers I’ve tried, although it was decently balanced as well; and the Up In Smoke Rauchbier was like liquid bacon. (Mmmm, bacon…)

2) The New Venue
Pretty much everyone agreed that the Festival had outgrown their old location at Fort York, and in many ways, it was never a great place to hold it anyway. The venue suffered from a severe lack of shade, and the main entrance was always a bit of a pain to get to. So while the word on the street is that they didn’t leave Fort York completely voluntarily, the move to Bandshell Park at Exhibition Place was a good one (and I’m not saying that just because I live about a 10 minute walk away). There’s a lot more space, more shade, and more seating, and just an all-around more pleasant vibe (even despite the completely overwhelming number of security guards and alcohol enforcement agents wandering the grounds).

3) The (Dwindling) Craft Brewer Contingent
I remember a time when almost every small brewer in the province would be at the Festival, but that is no longer the case, even though the website falsely claims that “more than 250 brands” and “over 95% of Ontario brands” are available. Even as the number of craft breweries on had has dwindled, there are still some stalwarts who have stuck it out, meaning that there are at least a handful of decent drinking options available. Aside from the aforementioned Great Lakes, Ontario micros on hand included Amsterdam, Black Oak, Cameron’s, Flying Monkeys, Mill Street, Niagara’s Best, Nickel Brook, Old Credit, Steelback, Trafalgar, True North and Wellington. And thanks to Esprit Agency’s “Beers of the World” booth and representation from McClelland Premium Imports, Innis & Gunn and Palm, there were a few worthwhile imports available as well.

5) …
Uhh… OK, so it appears that there were only four reasons for the Festival to be at least a little bit non-sucky this year. But that’s better than nothing, I guess.

For a somewhat less generous view on the event, check out my wife Sheryl’s blog post on the topic, where she explains why last week’s Craft Beer Festival at Hart House was so much better, a stance that I can’t really argue with. You might also enjoy Troy’s very thorough review over on his blog, while the write-ups at BlogTO and The Appetizer provide a couple of non-beer-geek perspectives.

If you want to check out the Festival yourself, it runs until Sunday, although Saturday is completely sold out. (What’s that old saying about fools and their money again…?)

This entry was posted in beer festivals and tagged cheese, Ontario. Bookmark the permalink.