A Pair from Propeller

Posted on November 2, 2009 by Greg Clow| Comments Off on A Pair from Propeller 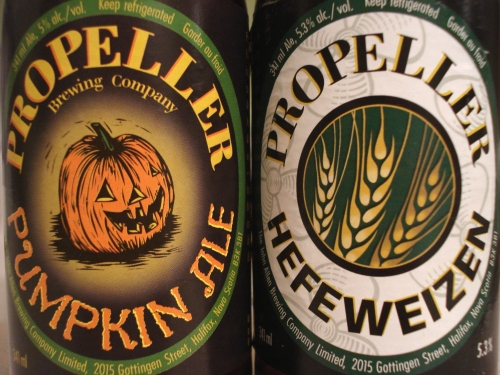 Yes, I know thatÂ  promised a series of Innis & Gunn review posts, and they’ll be coming soon eventually, and more as well. But I wanted to get this post up quickly while at least one of the beers is still in season.

The trigger for this was a package I got from Propeller Brewery in Halifax a couple of weeks ago with some bottles of this year’s batch of their Pumpkin Ale. It’s a beer that I liked a lot when I tried the 2006 version, so I was happy to give it another go, and even happier to find it just as good as I remembered it. In fact, based on this tasting notes from back in ’06…

Hazy light gold with a massive rocky white head. Big pumpkin pie aroma – cinnamon, cloves, ginger, mutmeg, pumpkin – very nice! Body is quite aggressively carbonated at first, but mellows as it warms and flattens a bit. Flavour of a pleasant, well-made golden ale laced with pumpkin and spice, and a dry finish with an interesting lemon cookie note. Very refreshing brew that lacks the cloying character that taints some other pumpkin beers Iâ€™ve tried.

… it appears that it hasn’t changed much since then. Which is perfectly fine.

And since I was in a Propeller mood tonight, I reached further into the fridge for the bottle of Propeller Hefeweizen that my friends Jeremy and Karen passed on to me a couple of months ago. I really should’ve had it sooner, as it was already 4 or 5 months old by then, and hefes are always better fresh. But it was still in OK shape considering:

Cloudy golden with a medium white head that recedes to a thin film that sticks around through the whole glass. Lightly yeasty aroma with hints of lemon and pineapple. Good mouthfeel with a nice level of carbonation. Flavour is a bit muted, but whatâ€™s there is pleasant, with nice tropical and citrus fruit notes, some crispness from the wheat, and a mildly spicy and yeasty finish. Based on the label, it looks like this was bottled back in April, so drinking it six months later Iâ€™m obviously not getting it at itâ€™s prime. Itâ€™s still a decent hefe, though.

I briefly considered making it a Halifax trio and cracking the Garrison Hop Yard I’ve got chilling in there, but it’s getting late. So I decided to hold off, and will perhaps bring it out along with a bottle of the Olâ€™ Fog Burner Barley Wine that I’ll be reviewing later this week for the next issue of TAPS.