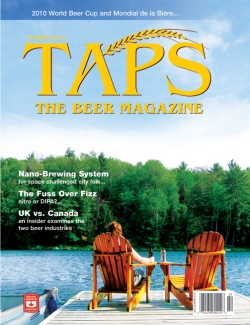 The Summer 2010 issue of TAPS Magazine is out now, and you can read a bit more about it (including details of both a format and subtitle change) over at Canadian Beer News (aka the blog that I actually post at more than once a every few weeks). Over here, I’ll just mention that it includes the 11th installment of my “Beer Styles 101” feature column, this one focused on Belgian-Style Ales.

This will likely be my final column in the series as well. While it would be nice to hit an even dozen, the 11 styles I’ve featured so far – Pilsner, Dunkel & Schwarzbier, Hefeweizen, Porter, Barley Wine, Pale Ale & Bitter, Belgian Witbier, Stout, IPA, Fruit Beer & Belgian-Style Ales – encompass the vast majority of the craft beers brewed in Canada. And since half the point of the column is to mention Canadian-brewed beers in the style being discussed, it would be tough to get a full feature out of any remaining style.

(You may also notice that only a few of the styles in the list above are linked to earlier posts that reprint the articles. That’s something I really should rectify, so I’ll try and get the rest of them posted here soon.)

In the meantime – here are the beer reviews & articles I’ve written for Taste T.O. since my last round-up at the end of March.

(There were no posts in April or early May due to Taste T.O. being on a publishing hiatus.)