Into The Light: A Molson Quartet 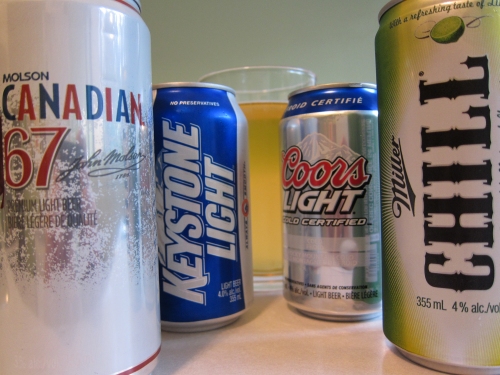 Over on Taste T.O. this week, I’ve got a review of Muskoka Pilsner Light, a newish beer from Muskoka Cottage Brewery that is “Light” due to being 4% alcohol, but is otherwise a solid and flavourful German-style pilsner. In the piece, I make the point that the name – which I assume was chosen at least partially to get the beer noticed by drinkers of Coors/Bud/Blue/etc. Light who may be willing to experiment a bit – might end up alienating Muskoka’s core customer base of craft beer drinkers who would sooner drink water than a typical North American Light Lager.

I have hope that the quality of the beer – which is quite high – will win it fans regardless of the name. But there’s still a big reason why so few small breweries call their beers “Light” even if they happen to be lower alcohol lagers, and that reason is that most mainstream light lagers simply aren’t very good. Not that they’re completely undrinkable (well, some of them, at least), but they inevitably lack some or all of the elements that craft beer drinkers look for in a beer – elements like colour, body, aroma and flavour.

I recently had a chance to reconfirm my opinion about macrobrewed light lagers when I received a promo shipment from Molson Coors Canada containing a selection of beers from their portfolio, ranging from light and ultra-light lagers to craft and pseudo-craft brews. I’ll give some thoughts on the beers in the latter category in a subsequent post, but for this one, I’ll be concentrating on the quartet of cans in the former group.

First up – Molson Canadian 67, the first Canadian entry into the ultra-light category that is one of the latest beer fads south of the border (see: MGD Light 64 & Bud Select 55), although it has more calories and slightly more alcohol (3% vs. 2.8% & 2.4%) than the American brands. The marketing behind the beer emphasizes the calorie count, noting that it’s “about 1/2 the calories of wine or mixed drinks”, and promises a “clean, crisp, fresh taste.” And honestly, I can’t say that they’re lying, as this straw-yellow beer is definitely clean and crisp – but it’s also remarkably lacking in aroma and flavour. There’s a vague hint of grainy malt and a passing wisp of grassy hops, but to its credit, it remains drinkable even as it warms up, which isn’t something that can be said about most mainstream lagers. In a word, it’s inoffensive.

Canada’s top selling beer, Coors Light, is the next one to hit the glass, where it exhibits a slightly darker yellow hue than the previous, but nothing in the way of a head. It also has more aroma than 67, but that’s not really a good thing, as there’s a distinctly stale and slightly sour malt character that’s quite unpleasant. The flavour is less problematic – or so it seems in the first couple of mouthfuls, when I taste pretty much nothing. But it’s not long before the same stale/sour notes from the aroma start to come through in the flavour as well. Not something I want in my mouth – although to be fair, neither the “COLD” nor “ROCKY MOUNTAIN COLD” indicators on the can were showing when I poured it, so I obviously wasn’t drinking it at it’s optimal serving temperature – i.e. a temperature at which your tongue is half-frozen so you taste nothing whatsoever.

Discount brand Keystone Light follows, and hey, look, there’s an actual head on this one! Well, there is for a minute or so, before it disappears and leaves the beer looking just as lifeless as the Coors. The aroma is, um, not good – stale grain, wet cardboard, cooked veggies, and something slightly fishy (and I mean that literally, not figuratively). Yikes. But thankfully, the flavour isn’t nearly as bad – it just tastes of dry hay with a faint hint of lemon. Next!

Last in line is Miller Chill, launched in Ontario this summer to compete against Bud Light Lime and other lime-flavoured beers. This is the second time Molson has offered me a sample of this beer, with the first coming to me last fall when it was released in Alberta. My review back then noted that “the aroma is initially not so pleasant, offering that stale malt and wet corn husk smell that I get from many mass produced lagers, but that slowly clears and is replaced with notes of candyish lime,” and that “the flavour holds very little that can be described as ‘beer-like’ â€“ itâ€™s more reminiscent of Sprite with a very, very faint wisp of malt.” Trying it again, my thoughts are virtually identical, with the main difference being that I find it a touch more enjoyable on this hot July evening than I did back on the cold day in October.

What to conclude from all of this? Mainly that it’s pretty clear these are not beers meant to be sipped and savoured and analyzed. They’re mass-produced products meant to be drunk cold and quickly on hot summer days. I don’t begrudge Molson-Coors for making them, or people for drinking them – they’re just not my sort of thing.

One Response to Into The Light: A Molson Quartet