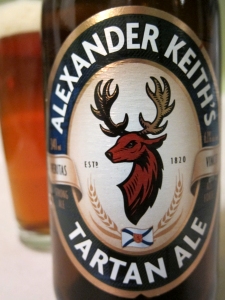 Did you know that today is Tartan Day in Canada? Neither did I until I got an email last week from Adam Grant at The Monks Table, a great pub and restaurant in midtown Toronto, announcing that April 6th is officially recognized as Tartan Day – a day to celebrate Canada’s Scottish/Celtic heritage – and that he’d be holding a week of events at the pub to mark the occassion. And with some Googling, I found a bit more about it.

Unfortunately, my schedule this week is making it unlikely that I’ll be able to make it up for any of the events, so as a consolation prize, I toasted the day with a bottle of Alexander Keith’s Tartan Ale, the latest in the Keith’s Brewmaster Series of limited edition brews. Some may remember my joking complaint a few weeks back about not receiving a press sample of this beer when every other beer blogger in town got one, and thanks to the magic/creepiness of the Internet, a rep from the PR company contacted me the next day to apologetically rectify the situation.

My comment wasn’t intended to be bait for a freebee – I was being more self-depreciating than self-promoting – but I did want to give it a try, so I accepted the offer. And of course, given the large number of opinions that have already been offered , it’s hard to say much that hasn’t already been said, especially since my impressions are similar to many already expressed.

To wit: Pouring a deep and clear reddish-gold with a large white head, it has a respectable appearance, and an equally respectable – if somewhat muted – aroma of sweet caramel and barley candy. The caramel predominates the flavour as well, with supporting notes of maple and orange, and a suggestion of peat smoke that builds a bit as the beer warms. The finish is short, but noticeably hopped, leaving a final impression of a beer that is a well made step-up from most of the Keith’s/Labatt line-up, but which isn’t really interesting enough to inspire me to purchase or open another.

This entry was posted in beer reviews and tagged ale, macrobrews. Bookmark the permalink.