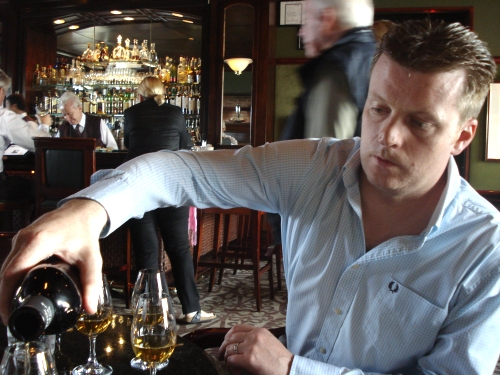 While it may play into stereotypes somewhat, there is some truth to the old adage about Scots being both thrifty and ingenious. So when the record snowfalls that struck Great Britain in the winter of 2009-10 caused the roofs of several warehouses holding casks of Glenfiddich whisky to collapse, it was almost inevitable that Malt Master Brian Kinsman (pictured above) would figure out a way to turn a potential disaster into something great.

Along with his team, Kinsman checked the contents of between 400 and 500 of the exposed casks – some ex-sherry, some ex-bourbon, with liquids ranging in age from 13 to 30 years – and selected around 200 to be melded into a special one-off bottling, something that is quite rare for the distillery. The result is Glenfiddich Snow Phoenix, a whisky limited to 60,000 bottles, with a portion of that recently arriving in Ontario (LCBO 236752 – $89.95/750 mL).

Kinsman recently came through town to hold some one-on-one tastings of Snow Phoenix, along with a run through of the standard line-up of Glenfiddich 12, 15 and 18. I shared my thoughts on this classic trio over on Taste T.O. last fall, so I’ll skip those here and go straight to the new arrival: 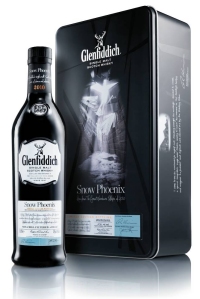 First of all, it’s worth noting that unlike most Glenfiddich whiskies, Snow Phoenix isn’t chill filtered, meaning that it has a slight haziness that becomes more pronounced when a splash of water is added. It’s also bottled at a higher proof than the regular range – 47% abv vs. 40% – which raises the expectation of it being a bit hotter than a regular Glenfiddich.

At first nosing, though, the increased alcohol is not especially evident. Instead, there’s a very pleasant melange of the fruit, honey and toffee typical of the Glenfiddich house style, along with some spice (cinnamon and clove), orange oil and faint oak as backing notes. On the palate, the honey and orange oil are the first to hit, with notes of sherry and vanilla filling the middle, before the booze finally takes over in the warm, spicy and slightly woody finish.

As we tasted, Kinsman stressed that while it’s limited nature has inevitably led to Snow Phoenix being viewed as a bit of a cachet product, his intention was still to make a whisky that is easy and pleasurable to drink, not just something to display on a shelf. He definitely succeeded in this regard.

In addition, the $89.95 price point puts Snow Phoenix at a cost quite reasonable for a limited specialty Scotch, making it accessible to more than just the collectors. Although if you have a few extra bucks kicking around, you might be interested in its sibling, Glenfiddich 50 Year Old, a single bottle of which is available now at the Summerhill LCBO for a mere $26,000. For the rest of us, though, Snow Phoenix will do just fine.

This entry was posted in spirits, whisky. Bookmark the permalink.