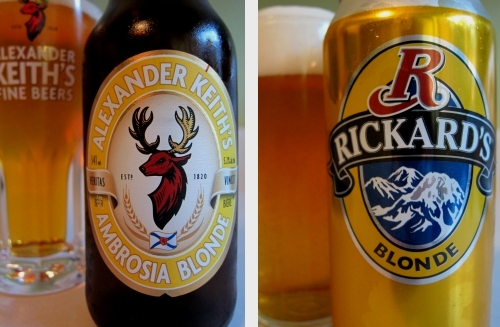 While it’s unlikely that either company would freely admit to it, it’s easy to get the impression that Labatt and Molson have been shadowing each other with their respective Keith’s and Rickard’s brands in the last few years, leading to a pair of pseudo-craft portfolios that are strikingly similar in their line-ups.

The latest parallel between the two is the recent and nearly simultaneous launches of Keith’s Ambrosia Blonde and Rickard’s Blonde. While there are some differences between the two – the Keith’s is an ale while the Rickard’s is a lager; the former is a limited Brewmaster Series release while the latter appears to be a new year-round product – the similar names and the arrival of promo samples of both within a week or so of each other made it impossible to resist doing a head-to-head review of the pair.

First, I’ll give kudos to the attractive glass that was included in the Keith’s press pack. Slightly reminiscent of the Sam Adams glass that was all the rage a couple of years ago, it lifts the appearance of the bright golden beer and snowy white head, making the beer look very nice – at least until the head quickly recedes, leaving a thin film of white bubbles on the surface.

The aroma is fairly nondescript, just some sweetish and slightly fruity malt with a bit of toasted grain, but it thankfully lacks the hints of cooked corn that I’ve found quite noticeable in the flagship Keith’s ale. The clean nose gives credence to the promise of Ambrosia being an all-malt beer, as does the similarly clean but simple flavour. The press release notes the use of Saaz, Hallertau and Willamette hops, and evidence of them can be found in the finish, but not without a bit of hunting, such is the subtlety of the hop profile.

Subtlety is also a hallmark of Rickard’s Blonde, but not quite to the same extent. First of all, it manages to retain its creamy head for much longer, even leaving respectable lacing behind, and while the aroma starts with sweet grains, there are some noticeable and much welcome floral hops offering their support.

As for the flavour, I’m of the same opinion of Messrs. Beaumont and Schryer that the brewery description of it being a “German-style pilsner” is a bit off-base. It doesn’t have the lean and almost mineral-like character that I expect from that style, instead leaning closer to the Czechs due to its sweet, honeyish backbone. That said, it’s quite well hopped for a big brewery lager, resulting in a pleasantly dry, moderately herbaceous finish that lingers on the tongue longer than expected.

So while neither beer leaves enough of an impression on my palate to make them something I’d purchase regularly, I’d credit both of them as being better than they might’ve been given their mass market origins, with an edge given to Rickard’s, even despite its stylistic fumble.

This entry was posted in beer reviews and tagged ale, lager, macrobrews. Bookmark the permalink.