Like many drinkers of better beer who came of age a couple of decades ago, one of the first imports I tried was Newcastle Brown Ale. It was never a top choice for me – if I was drinking a dark beer from overseas, it was usually Guinness. But back in the days when the local microbrew scene was still fledgling and decent imports were few and far between, I had no problem downing a pint of two of Newkie in places where it was available.

While I don’t often see it on tap in these parts anymore, Newcastle Brown is still one of the top import brands down in the US. It makes sense that parent company Heineken would want to use that brand recognition to try and grab a bit more of the market, so I wasn’t surprised when I received a PR pitch a few weeks ago regarding the Newcastle Limited Edition series, a set of four seasonal beers – Summer Ale, Werewolf, Winter IPA and Founders’ Ale – that are being brewed in the UK especially for the American market.

In keeping with the season, samples of Werewolf and Winter IPA were provided, and while I tried them and jotted some notes soon after arrival, various factors have kept me away from the ol’ blog for a while. So with apologies for my tardiness, here are a few thoughts on the pair: 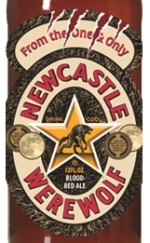 Newcastle Werewolf is described in the promotional bumpf as a “formidable beast”, suggesting that something big and bold is being contained by the bottle. Mention of “a bite of bitterness” that’s “long, deep and lingering” raise even more anticipation. Sadly, though, aside from it having the promised “blood red” colour, it’s a pretty straightforward darkish ale. The aroma has toasted malt, a bit of chocolate, and not much else, while the flavour augments those two notes with some dark cherry and perhaps a smidge more hops than typically expected from the style, but not approaching anything I’d describe as “lingering”. It’s a respectable enough brew, but one that ultimately isn’t really worthy of its name.

And speaking of misnomers; Anyone expecting a full-bore craft-style India Pale Ale from Newcastle Winter IPA will be setting themselves up for disappointment, as its is more in line with mainstream UK IPAs like Wells Eagle and Caledonian Deuchars. Using those brews as a comparison point, Winter IPA performs well, throwing off burnt toffee and biscuit on the malt side, and even-handed hop notes that are somewhat tea-like with a backing grassiness. There’s also a slight mineral tang around the edges, and a soft and slightly creamy mouthfeel to hold it all together. Like its lycanthropian cousin, it’s not a showstopper, but it might just twig a few Newcastle Brown drinkers to the fact that there are more beer styles out there that are worth exploring.