As I mentioned upon my return the other day, one of the things that has kept me busy these past few months has been Taste T.O., the food and drink website that my wife and I publish. A good chunk of the time was spent on a redesign of the site that is about 95% complete, but I also do a lot of writing there – if you keep an eye on that site (or the RSS feed in the sidebar over to the right), you’ll know that I generally have a post of some sort up there every couple of days.

Of most interest to the folks reading this blog would be my Tuesday column, which up until recently was a Beer Of The Week series, but which will now be alternating between beer reviews and pub profiles, plus occassional pieces on other boozy beverages, such as an article on premium spirits that I did a couple of weeks ago.

As part of my pledge to post here more regularily, I’m going to try to remember to post a link here to my Taste T.O. column each Tuesday. In the meantime, here’s a round-up of everything that’s been posted since the last time I did one of these round-ups back at the end of July:

The Very Beery Month Of May

Wow, nearly a month since my last post. That’s a long time, even for an irregular and inconsistent blogger like myself. Lotsa things have been keeping me busy – in fact, looking back at my social calendar for the last month, you could say that I’ve just been too busy drinking good beer (+ other things) and eating great food to write about any of it…

END_OF_DOCUMENT_TOKEN_TO_BE_REPLACED

The Canadian Brewing Awards: Worth The Drive To Vaughan 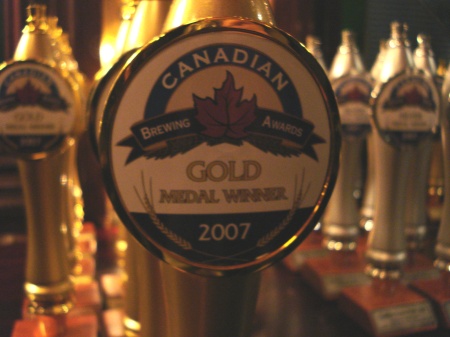 I am, I must admit, a downtown snob. I rarely go north of Bloor, except when I’m going to the Summerhill LCBO or the Granite. Any further than that, and I start to get antsy.

So when I found out that this year’s Canadian Brewing Awards were being held at the Dub Linn Gate Irish Pub in Vaughan – aka “The City Above Toronto” – I nearly had a panic attack. Highways! Strip malls! No public transit! AIIIIEEEEEE!!!

OK, it wasn’t really that bad. I just had to scramble a bit to bum a ride, but once that was arranged (thanks, Jeff!), I was looking forward to it. Even though this is the 5th year they were being awarded, it’s the first year that I actually paid attention and planned on attending.

END_OF_DOCUMENT_TOKEN_TO_BE_REPLACED

An Award For Beau's Lug-Tread (Sort Of…) 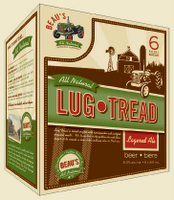 Last weekend I headed on down to beerbistro for the 4th annual Golden Tap Awards, a beer awards event arranged and presented by Cass Enright of The Bar Towel. Unlike other Canadian and Ontario beer awards, the GTAs are chosen via online voting by beer drinkers, not industry insiders or “expert” tasting panels, and there are no outside sponsors, so there are no token awards like “Best Selling Beer: Coors Light”. As a result, they’ve quickly gained the respect of breweries and bar owners from across Toronto (where the awards were focused for the first three years) and Ontario (where they expanded this year).

Adding to the democratic nature of the awards is the Best Of The Fest prize, which is awarded based on votes cast for the beers that are being served on tap and in bottles during the event. This year’s nod went to Lug-Tread Lagered Ale, a KÃ¶lsch style beer from Beau’s All Natural Brewing, a new brewery up near Ottawa.

Well – more accurately, it went to an odd variation on Lug-Tread that Beau’s Steve Beauchesne has dubbed the world’s first “KÃ¶lsch-Bock”. The birth of this mutant hybrid is described in a blog post about what happened when they kegged their first commercial batch:

Our Lug Tread is a tribute to the very subtle KÃ¶lsch style from Cologne, Germany. This batch, while very tasty, was anything but subtle. Assertive bitterness and mouth-filling maltiness were the dominant traits, with a notable alcohol flavour. In fact, it tasted more like a Bock or a BiÃ¨re de Garde than a KÃ¶lsch.

While we stood there perplexed, back at the brewery Matt was discovering the secret of what we would later christen our KÃ¶lsch-Bock. Our double-jacketed unitank, with icy kosher propylene glycol coursing through its veins, apparently worked a little too well. A 150 litre “iceberg” had formed, effectively concentrating the remaining wort and giving the yeast little opportunity to settle.

As this discovery was made during weekend of their official launch in Ottawa, with kegs ready to tap and media ready to hype them up, they felt that they had no choice but to release the beer under the Lug-Tread name, and hoped that they could spread the word about the beer-sicle accident so people would understand why the beer was the way it was. And according to a later blog post from Steve:

[I]t looks like our initial gamble to release the high-octane version of Lug Tread was the right decision. It seems that most people get the fact that weâ€™re new and that one batch is going to taste different from the next for the first few rounds through (insert huge sigh of relief, wipe sweat from brow).

Of course, it hasn’t been completely smooth sailing. Response from the folks on RateBeer has been far from kind, although some of that can be chalked up to the fact that style sticklers may take some objection to this very non-KÃ¶lsch-like beer, even after the reasons are explained by the brewer.

I’ve also seen comments that since the beer didn’t come out as expected due to a mechanical malfunction, Beau’s should have chucked the batch and started over, even though they thought the resulting product was quite tasty, and pitching it would have caused the last-minute cancellation of a long-planned Canada Day launch event.

Or maybe some people simply don’t like the beer.

Whatever the case – even though they were generally happy with the reception their KÃ¶lsch-Bock garnered in Ottawa, Steve and co. still took these criticisms to heart, especially when they were planning what to bring to the GTAs:

Instead of bringing a keg from batch 2 â€“ still not exactly where we want the final product to rest, but a much smoother beer, definitely moving in the right direction – I had an idea which I ran by Matt (our brewer): â€œWhat if we brought the bathtub beer?â€ This was a nickname we had given the last remaining keg of our KÃ¶lsch Bock.

You see, en route to deliver the keg to Pub Italia, we found out they were not able to put us on tap right away and asked if we could deliver it the following week. What to do with the keg??? We had a walk-in cooler that was not operational yet, and, desperate to save the beer, we put it in Jamieâ€™s bathtub, filled the tub with ice, and hoped it would survive.

Knowing that the Golden Tap crowd would a) recognize good beer and b) be interested in something different and new I thought to myself, what a great way to use up the rest of this keg. A week before the event Matt and I tapped the keg to give it a test. I was convinced that the beer was fabulous, but Matt was worried. Would these aficionados forgive the beer for not being what it had originally intended to be and judge it simply on what it was? Or would they write it off as a pitiful attempt at a very specific beer style? Matt reminded me that the breweryâ€™s fortunes aside, his reputation as a brewer was at stake, something I had not considered up to that point.

After sampling the beer with a few more friends and fellow brewers, they went with their guts and stuck with the KÃ¶lsch-Bock. Based on the audience response, it looks like this was another gamble which paid off big.

Oh, I guess I should mention what I thought of the beer. First of all, it probably goes without saying that it doesn’t resemble a KÃ¶lsch in the least, aside from the bright golden hue. And given its high octane alcohol level, it definately has some boozy notes in the nose and flavour. But it also has a very nice sweet, fruit and slightly floral character that I quite enjoyed. It actually reminded me somewhat of King PilsBock, a similar – but intentional – hybrid that came out from King Brewery back in the spring. It wasn’t my favourite beer of the fest – that honour goes to the fantastic Ste. Andre Great Eastern IPA – but it’s an interesting, flavourful and enjoyable beer, style be damned. And isn’t that the most important thing?