A Sneak Peek at The Beer Boutique

There are a lot of things that I don’t like about The Beer Store. I don’t think it’s right that Ontario’s main retail outlet for beer is owned by three foreign-owned/partnered companies (Labatt/InBev, Molson-Coors and Sleeman/Sapporo). I dislike the restrictive listing fees that make it difficult or impossible for many small breweries to get their products stocked. And most of all, I despise the fast food style counter service offered at the majority of its locations, a sales method that presents customers with a wall of labels and prices with no other information about the beers on offer, ultimately discouraging many of them from trying new things and enforcing the status quo of The Big 10.

While I don’t see my first two complaints being addressed any time soon, the third has been mitigated somewhat by a few self-serve locations, such as the one I visit occasionally at Dufferin Mall. But while it doesn’t bother me much that the main browsing area at this store is essentially a refrigerated storeroom, there are others who are looking for something a bit more refined in their retail experiences – not to mention more variety in singles and six-packs than what’s offered at the average Beer Store, where the 2-4 tends to be king.

It’s undoubtedly these types of customers that inspired the creation of The Beer Boutique, a new offshoot of The Beer Store that opens its first location in Toronto’s Liberty Village today. Last night was a media and VIP preview, and I got in to take a few snaps and check out the joint.

END_OF_DOCUMENT_TOKEN_TO_BE_REPLACED

Anyone who has spoken to me about beer for more than five minutes or so is quite familiar with my rant about the pitiful selection of American craft beer here in Ontario. The only American microbrew available to us on a year-round basis is Anchor Liberty Ale, and the only other even halfway decent US beer on our shelves is Sam Adams Boston Lager. This despite the fact that some of the best beers in North America – if not the world â€“ are being brewed just across the border.

I learned just how much we’re missing back in 2003 when I joined a couple of friends on a road trip to the Michigan Brewers Guild Summer Beer Festival. At the time, I only knew about one or two Michigan breweries, so it was quite an adventure to be exposed to several dozen new breweries and their 200+ beers. I ploughed through as many of them as I could in the few short hours of the festival, but there were so many more that I didn’t try, so a return trip had been on my mind ever since.

Back in the spring, my four regular beer tasting buddies and I decided to take the trip to this summer’s edition of the Festival, and hit a few other beer destinations on the way. Thanks to beermapping.com and the Places & Metros sections on RateBeer, we were able to put together a nice itinerary for ourselves, and on July 21st we were on our way.

We all crawled out of our respective beds bright and early, and after some zig-zagging around town to do the pick-ups and the obligatory stop at Timmy’s, we hit the highway. The morning passed quickly, and the border crossing at Sarnia/Port Huron was uneventful. We made it to Royal Oak by noon, just in time for lunch at our first destination. 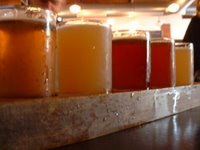 Bastone (419 South Main St., Royal Oak, MI) is a slightly upscale but unpretentious Belgian-themed brewpub. The room is large and high-ceilinged, but made to feel cozy with strategically placed booths and dividers, and the service is attentive and friendly. Their food menu features Belgian favourites alongside such pub-friendly selections as burgers, sandwiches, pizzas and pastas â€“ if you happen to visit, I highly recommend the oven-baked macaroni & cheese with truffled breadcrumb topping.

Most importantly, they make some mighty fine beer, drawing influence not only from Belgian brewing traditions, but from other European classic styles as well. Their regular line-up features Blonde, Pilsener, Belgian Wit, Pale Ale and Dubbel, and they also dedicate two taps to seasonal offerings, with Dortmunder and Hefeweizen being the selections when we visited. The only real disappointment in their line-up is the Blonde â€“ it’s a 4% pale lager, obviously brewed to appease any Coors Light drinkers who may dine there â€“ but the rest ranged from enjoyable to very good. I especially liked their Pale Ale, which struck a perfect balance between sweet caramel malts and sharp, citric hops; and their Pilsener, a refreshing and well-hopped take on the style. Good beer, good food, good atmosphere – it was a promising first stop for the weekend.

It was only a few miles from Bastone to our next stop: Kuhnhenn Brewing (5919 Chicago Road, Warren, MI). Kuhnhenn is one of the most creative and adventurous breweries around, as illustrated by their brewery page at RateBeer that lists over 100 different beers, ciders and meads they’ve brewed since 1998. Our primary purpose for this visit was to pick up some bottles of their revered Raspberry Eisbock, and between the five of us we cleared them out of all but a few bottles from their last couple of cases. And since we were there, we couldn’t resist getting a few sampler trays to try the beers they were serving in their rustic looking taproom. 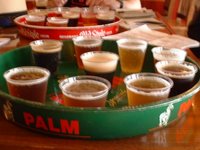 As at Bastone, the most disappointing offering was their pale lager which they dub Classic American Lager and fittingly describe on the menu as “light in color, some sweetness, no hop aroma, very low bitterness” â€“ i.e. one for the mainstream lager drinkers. Thankfully, the rest of their line-up is much more creative, with some highlights from our visit being their perfectly on-style Hefeweizen, their fruity and hoppy IPA, their astoundingly decadent CrÃ¨me BrÃ»lÃ©e Java Stout, and their unique Tangerine Wit that we all agreed would make a perfect breakfast beer. We also sampled their Nine Belgian Ale, Loonie Kuhnie Pale Ale, Scotch Ale, Maibock and ESB.

From there, it was an hour or so to our hotel near Ann Arbor where we checked in, dumped our gear, and then headed out on our main shopping expedition of the weekend to Bello Vino Marketplace (2789 Plymouth Road, Ann Arbor, MI). These sort of upscale grocery stores that also house a great selection of beer & wine are quite commonplace in a lot of American cities, but to Ontarians who are at the mercy of the LCBO and The Beer Store, they’re like a little bit of heaven on earth. Bello Vino reminded us a lot of Premier Gourmet, a fine food & drink emporium in Buffalo that is a favourite spot for Toronto beer geeks making border runs. But being in a different state, we found a much different selection of beer, including lots of stuff from Michigan mainstays like Bells, Jolly Pumpkin & Founders (although alas, they were out of the latter’s mindblowing Breakfast Stout); goodies from other Midwestern faves such as Great Lakes and Goose Island; and a f
antastic array of imports that we could normally only dream about. Thanks to a very helpful staffer who was willing to split up a bunch of six-packs for us, we were all able to put together a new assortment of local and not-so-local beers, and we headed back to the hotel with a much heavier back-end than we’d arrived with.