Posted on February 27, 2007 by Greg Clow| Comments Off on Esplanade Bier Markt

This article was originally written in February 2007 for the food & drink website Taste T.O., and republished here in September 2011 (but back-dated to match the original publication date) after Taste T.O. was shut down and taken offline. 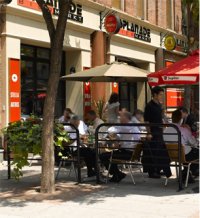 I like good food. I like good beer. I really like good food and good beer together. So applying accepted scientific principles, it would seem that I should just love Esplanade Bier Markt. Before beerbistro and other so-called gastropubs came along, the Markt was the first place in Toronto that attempted to show that beer can be paired with good quality food just as well as wine. They had a beer list that was at the time rivalled only by the selection at Smokeless Joe, and they served a solid line-up of bistro-inspired dishes. All in all, it was a seemingly perfect place for me.

For a number of reasons, though, I’ve never really enjoyed myself there. The ambience suffers from a severe case of split personality, and while beer is obviously the Bier Markt’s main raison d’Ãªtre, it sometimes feels as if it’s not given the attention it deserves. But before getting too negative, I should focus on some of the good things about the Bier Markt. As noted above, the food has always been great, and remains so under executive chef Michael Cipollo.

END_OF_DOCUMENT_TOKEN_TO_BE_REPLACED

Comments Off on Esplanade Bier Markt