Posted on August 21, 2007 by Greg Clow| Comments Off on Beer of the Week – Church-Key West Coast Pale Ale

This article was originally written in August 2007 for the food & drink website Taste T.O., and republished here in October 2011 (but back-dated to match the original publication date) after Taste T.O. was shut down and taken offline. 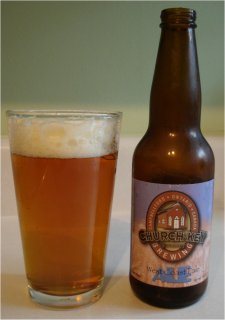 Spend any amount of time talking to a serious beer geek, and odds are they’ll soon start raving about the beers being brewed on the West Coast of North America, most notably those that come from the Pacific Northwest and the San Diego area. Much like the West Coast hip-hop artists of the ’80s and ’90s, many brewers out there take a more aggressive and experimental approach to their craft, creating beers that push the envelope in terms of flavour (especially hops) and alcohol levels. This trend toward so-called extreme beers has now spread throughout the country and around the world, but the American West Coast was the primary breeding ground for these over-the-top brews.

While it’s not quite so out there as such monstrous Western US brews as Stone Arrogant Bastard or Russian River Pliny the Elder, West Coast Pale Ale from Church-Key Brewing of Campbellford, Ontario still manages to live up to its name. With a very generous hopping level – especially by the usual Ontario brewing standards – West Coast may very well be one of the bitterest beers available in our province today. And I mean that as a compliment.

While the flavour of hops is definitely an acquired taste, the strong notes of citrus and herbs that they contribute to this beer are actually quite refreshing. It also helps that Church-Key owner and brewmaster John Graham feeds this brew a good amount of malt, which gives it enough body and up-front sweetness to balance the bitterness. Stylistically, I suppose it sits somewhere between a traditional India Pale Ale and a newfangled American Pale Ale, but what really matters is that it tastes fantastic. Which is probably one of the reasons that Church-Key took the award for Best Ontario Microbrewery (Outside of the GTA) at this past weekend’s Golden Tap Awards at beerbistro.

Like all of Church-Key’s beers, West Coast Pale Ale isn’t widely available in Toronto, but if you frequent some of the city’s better beer bars such as Volo
or C’est What, you may come across it. If you prefer home consumption, you’ll have to head out to Campbellford to pick some up, as bottles of all Church-Key products are available only at the brewery. Church-Key is also the official beer supplier for the Harvest Wednesdays series at the Gladstone Hotel, and they’ll be one of the craft breweries pouring samples at the Black Creek Brews Fest taking place August 25th & 26th at Black Creek Pioneer Village.