For a city of its size and population, Toronto has an embarrassing dearth of brewpubs. In fact, up until a couple of weeks ago, we had exactly one of them: The Granite. It’s a great place, but since I’m a downtown snob who tends to get nosebleeds if I go too far north of Bloor Street, I don’t make it up there very often.

(C’est What is often referred to as a brewpub, but since their house beers are brewed off-site at Durham Brewing, they don’t meet the usually accepted definition of the word.)

So when word came down earlier this year that Mill Street Brewery would be relocating their main operations to a much larger brewery in the suburbs and turning their original Distillery District location into a brewpub, there was much rejoicing throughout the local beer scene. 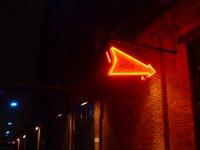 After months of anticipation, the Mill Street Brewpub was finally opened in late October with surprisingly minimal fanfare. I made it down for my first visit earlier this week, and I can say with very little reservation that it was well worth the wait. My only disappointment was that Alan at A Good Beer Blog beat me to the reviewing punch even though he lives about 250 kms away. Plus he never lets me know when he’s going to be in town. Bastard.

Anyway. Since it’s located in the Distillery District, the place has great atmosphere almost by default, but they’ve really gone above and beyond with the renovations that they’ve done over the past few months. Aside from the brewing tanks in the middle of the room, it’s almost unrecognisable from its time as a regular brewery, and it strikes the perfect balance between being spacious and cozy.

It pretty much goes without saying that the beer is excellent, but I’ll say it anyway: The beer is excellent. In addition to their core line-up of Tankhouse Ale, Organic Lager, Coffee Porter and Stock Ale, they’ve promoted their Oktoberfest, Wit and Helles Bock from seasonal to year-round status, revived their Cobblestone Stout which hadn’t been available for a couple of years, and added an IPA and an ESB to the roster. A Kriek is coming soon, as well as some one-offs/seasonals, and the bar will soon be outfitted with a hand-pump for some cask ale action. Oh, and they found a keg or two of their 2004 Barley Wine that they’re serving up as well.

Lots to choose from, but I was in the mood for some new stuff, so I went with the two that I hadn’t tried before. The ESB was excellent – fresh, earthy & fruity with an appealing graininess and a moderately dry, herbal finish. I was less enthralled with the IPA – it was pleasant enough, with a nice, well-balanced flavour, but when they’ve already got the hoppy pale ale bases covered with Tankhouse, this one almost seems like an afterthought. 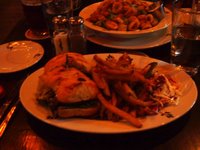 As for the food side of things, since pubs tend to cater strongly to the carnivore set, the wife and I were expecting a lack of vegetarian options, and our expectations were pretty well met in that regard. There are only two completely veg options in the main courses – a veggie pizza and the ubiquitous roasted vegetable sandwich – although the appetizers and salads are a bit friendlier to the meat-avoiders. Since we also eat seafood, we had a few more options than if we were complete veg-heads.

To start off, we snacked on a generous basket of kick-ass sweet potato fries. For my main, I ordered a Caesar salad and sprung an additional $3.99 to get some calamari added. At that price I expected maybe a handful of calamari thrown on top, but was pleasantly surprised to find the salad so covered in tasty golden-brown squidy goodness that I could barely see the green stuff underneath. Sheryl went with the veggie sandwich which she proclaimed to be fairly average, and our carnivorous dining companions both decided on the pulled pork sandwich which was declared good but “unusual” due to the inclusion of cheese.

Final verdict: Amazing space, great beer, decent food. It’s a bit out of the way for me to visit often, but I’ll happily return for new beers and other events.