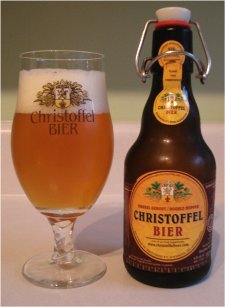 Comments Off on Beer of the Week – Christoffel Blond

Beer of the Week – Gubernija Grand 9.5

This article was originally written in June 2007 for the food & drink website Taste T.O., and republished here in October 2011 (but back-dated to match the original publication date) after Taste T.O. was shut down and taken offline. 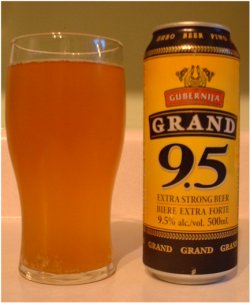 When most people read the words “Malt Liquor”, the image that likely pops into their heads is homies in South Central drinking 40s of St. Ides, or perhaps the neighbourhood drunk slumped in an alley with a king can of Schlitz Red Bull spilled beside him. Either way, the beers that tend to be tagged as malt liquor aren’t exactly considered to be beverages of the highest quality.

Of course, the definition of “malt liquor” can vary depending on where you live. In some jurisdictions, any beer above a certain alcohol percentage must be labelled as “malt liquor” before being sold, meaning that everything from cheap, high-octane swill to elegant strong Belgian ales are considered to be in the same category in the eyes of the alcohol overlords.

As a beer style, however, malt liquor is generally understood to be a strong (usually 6% to 9% abv) lager that is most often brewed with the addition of non-barley adjuncts such as corn and sugar, and a very low hop content. The result is a sweet brew with very little bitterness and a strong alcoholic punch. The flavour and aroma are often unpleasant, with notes of everything from rotting vegetables to jet fuel, but such concerns are secondary in a beer that is simply intended to get the imbiber as drunk as possible, as quickly as possible.

While such an aggressive and disagreeable beer style may logically seem to be a North American invention, malt liquor actually has a precedent in the old world, most notably in Poland and other Eastern European countries, where European strong lagers have been popular for generations. As with their North American kin, these beers are golden lagers with high alcohol percentages, but they are generally free of adjuncts, which causes them to be less sweet and cloying, and closer in character to pilsners, albeit with a more malt-forward character.

When does this all have to do with this week’s beer, Gubernija Grand 9.5? Well, this Lithuanian lager is a sort of missing link between the two styles. Being from Eastern Europe, it definitely comes from the European strong lager tradition. But the addition of corn groats to the recipe gives it a sweeter character that edges it towards malt liquor territory, which is where many classify it.

Personally, though, I’m inclined to consider it closer to the former category than the latter for a couple of reasons. First, unlike the piss yellow hue of most malt liquors, Grand 9.5 has a slightly hazy golden colour that actually looks pretty nice. And while the aroma and flavour both have a distinctive icing sugar note that is a bit cloying around the edges, it’s not overpoweringly sweet, and there’s even a subtle hint of hops in the finish.

So while it certainly won’t be giving any of the Belgian trappists or Imperial IPAs a run for their money in the more general strong beer category, I think it’s safe to say that Gubernija Grand 9.5 sits near the top of the cheap strong lager class. Those looking for an alternative for Colt 45 or Wildcat Strong can see if they agree by picking some up at the Beer Store where it was recently made available in striking yellow 500 mL cans.

Comments Off on Beer of the Week – Gubernija Grand 9.5