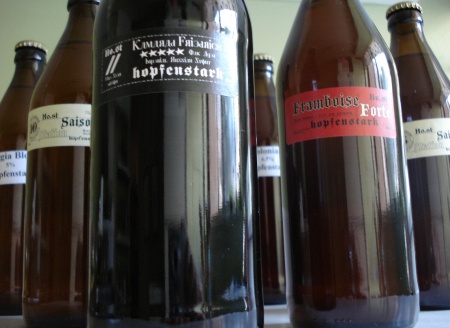 As I mentioned in my infamous “Ass Sandwich” post a while back, one of the highlights of my trip to Montreal in February was meeting Fred Cormier of Microbrasserie Hopfenstark. It was a highlight not only because he’s a great guy with a lot of passion for beer, but also because he’s a very generous guy who gave me and my travelling companions a box of beer to bring home with us.

I went through my share of the goodies soon after returning to Toronto, and have intended to write something about them here ever since, but lack of time and organizational skills have caused a delay until now. Below are my tasting notes from the half-dozen bottles I tried, as originally written for RateBeer:

END_OF_DOCUMENT_TOKEN_TO_BE_REPLACED

We've Got The Funk

Work has been kicking my ass lately, so posts here have been few and far between. This should soon change – at least temporarily – as I’m heading down to New York City next week for a course, and I plan to spend my evenings doing some beer-hunting with daily reports to follow.

But in the meantime, I thought I’d give a quick mention about a tasting that I had with the usual crew a couple of weeks ago, where we sampled the wares of two of the most unique breweries on earth: Cantillon and Jolly Pumpkin.

Cantillon are a family-owned concern in Brussels, Belgium that has been brewing traditional lambics for over 100 years. They’re one of the few breweries still producing true, unadultrated lambics and as such they’ve become renowned amongst beer connoisseurs. Their beers are admittedly an aquired taste, as they are remarkably tart and dry, with strong flavours that get tagged with names like “funk” and “barnyard” and “horse-blanket”. Yeah, they may not sound very appealing, but once you get a taste for ’em, there’s really nothing like ’em.

As for Jolly Pumpkin, they’re a much newer brewery that started up a few years ago in Dexter, Michigan. Unlike a lot of craft breweries that start out with a couple of popular styles – like pale ale or pilsner or stout – before starting on the weird shit, these guys went straight to the weird shit and never looked back. According to their website, they specialize in “open fermentation, oak barrel aging, and bottle conditioning”, but that only begins to describe the wonderful and wacky beers that they produce. They only comperable brewery I can think of is Fantome, a Belgian farmhouse brewery that offers a similarly eclectic line-up of beers, many of which fall into the nebulous biÃ¨re de garde category.

Along with a few other things, we managed to make it through eight of the nine pictured bottles. I didn’t take notes on all of them as I’d tasted & reviewed a few of them before, but my thoughts on all of them, whether reviewed at this tasting or previously, can be found on their RateBeer pages linked here: