Posted on April 24, 2007 by Greg Clow| Comments Off on Beer of the Week – Atlantic au Pineau

This article was originally written in April 2007 for the food & drink website Taste T.O., and republished here in September 2011 (but back-dated to match the original publication date) after the Taste T.O. blog was shut down and taken offline. 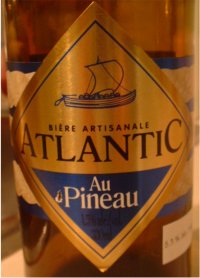 As mentioned in last week’s column, the LCBO’s Spring beer release has started trickling out into selected locations. It’s quite a lean release this time around, featuring only six beers, one of which (Fruli Strawberry Beer) is already available year-round at the Beer Store. Of the remaining five beers, only two are imports: the Duchy Originals Organic Ale that I wrote about last week, and this week’s pick, Atlantic au Pineau (LCBO 24372, $3.45/330 mL).

This beer comes from Brasserie des Gabariers, the French brewery responsible for the Cognac-laced XO Beer that has been available in a couple of previous LCBO seasonal releases. XO elicited some pretty strong “love it or hate it” responses from the local beer geeks, and I was one of the ones who actually enjoyed it, so I was looking forward to trying this one. Instead of straight Cognac, Atlantic is infused with Pineau des Charentes, a liqueur that is made by blending Cognac with unfermented grape juice.

Unfortunately, the ingredients list also includes sugar, which means the resulting beverage ends up being more of a sweet apertif or dessert drink than a typical beer. At least it looks like a beer, with a bright golden colour and a massive white head that disappears fairly quickly. The aroma is a bit grassy, suggesting that there are some hops in there, but it’s mainly quite sweet – almost cloyingly so – and the body is sticky. The flavour is also very sweet, with strong notes of white grape juice and sugar syrup, and a middling beer behind it.

Like the XO, this is essentially a gimmick beer. It’s just that it’s a gimmick that doesn’t work as well as it’s predecessor. Still, it’s worth a taste for the novelty value if nothing else. Just don’t bother buying more than one – unless, of course, you have a serious sweet tooth and prefer beers that don’t really taste like beer.

Comments Off on Beer of the Week – Atlantic au Pineau

Posted on March 20, 2007 by Greg Clow| Comments Off on Beer of the Week – Gayant La Goudale

It would be a bit of an understatement to say that France is not known for having a great beer culture. After all, it’s one of the countries most synonymous with wine, and most people would be hard pressed to name a single French beer. (No, Brador doesn’t count.)

But in the Northern region of the country known as Nord Pas-de-Calais, the influence of Belgium holds a lot of sway (as indicated by the area’s colloquial name of French Flanders), and a beer style known as biÃ¨re de garde is the drink of choice. Translated as “beer for storage”, biÃ¨res de garde are strong ales (usually 5% to 7.5%) that were originally brewed by farmers in the spring to last through the summer months when the warm weather made brewing more difficult. This farmhouse pedigree makes them a cousin to the Belgian saison, a style that is more common in North America thanks to the popularity of Saison Dupont.

It’s a shame that we don’t get more of these beers over here, as they can be just as interesting and varied as saisons and other traditional European styles. One that is available in Ontario now is La Goudale from Les Brasseurs De Gayant, although you’ll have to hunt for it as it’s only available via private ordering from the import agency Roland + Russell.

While saisons tend to be hazy in appearance, biÃ¨res de garde are usually clear and bright, and this one is no exception as it pours a clear golden colour with a moderate white head. There’s lots of wheat and yeast in the aroma, as well as some herbal tea notes. The mouthfeel is slightly sticky, and the flavour is quite sweet and honeyish to start, followed by a dry herbal finish. As it warms up, the 7.2% alcohol comes to the forefront a bit too much, but it’s still quite a palatable beer that would pair well with rustic farmhouse meals, or with a heaping serving of moules frites. Contemplate it for a while and you’ll probably find characteristics that bring to mind the strong ales of Belgium, even more proof that when it comes to beer, traditions are generally built around the shared histories of historical regions rather than modern national borders.

Comments Off on Beer of the Week – Gayant La Goudale