Posted on May 1, 2007 by Greg Clow| Comments Off on Beer of the Week – Great Lakes Orange Peel Ale

This article was originally written in May 2007 for the food & drink website Taste T.O., and republished here in September 2011 (but back-dated to match the original publication date) after the Taste T.O. blog was shut down and taken offline. 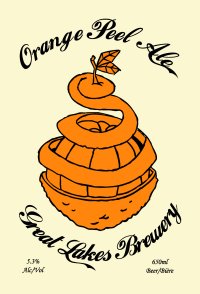 In a local craft beer scene that has seen its fair share of well-intentioned failures, Etobicoke’s Great Lakes Brewery is a low-key success story. Founded in 1987, Great Lakes spent many years brewing nothing but Golden Horseshoe, an easy drinking lager that was initially available only on draught. It was eventually bottled and joined by two other beers, Red Leaf Lager and Black Jack Black Lager. All three beers catered to fairly mainstream tastes, and while not wildly successful, they developed enough of a following to keep the small brewery operational for the last two decades.

Sometime last year, however, they suddenly decided to break from their usual mould and try something different with a series of seasonal releases. Their first effort, the full-flavoured Devil’s Pale Ale, was launched at last summer’s Festival of Beer at Fort York, and it surprised many local beer drinkers who knew the brewery from their trio of mellow lagers. Even more surprising was their Winter Ale, a strong spiced ale that was perfect for the holidays.

Most recently, the series has continued with Orange Peel Ale. As the name suggests, this golden ale had orange peel added during the boil, giving both the aroma and flavour an interesting citrus note that compliments the sweet malts and soft herbal hops. Despite the use of five specialty malts and five varieties of hops, this is not an exceedingly complex beer, and the orange notes are quite subtle. In fact, it’s quite reminiscent of a good UK session bitter, albeit with a slightly fruit-accented character. But given the sickly sweetness of many fruit beers, it’s nice to have one that doesn’t beat you over the head with the fruit, and just lets it be one aspect of a tasty, well-crafted beer.

One other good thing about Orange Peel Ale: Unlike the previous Great Lakes seasonals which were only available on draught or at the brewery, this one is part of the LCBO’s spring beer release (LCBO 615633, $4.95/650 mL). Quantities and distribution are limited, but it’s been so popular that the brewery is doing a second batch to meet demand, so you should be able to find it for at least the next few weeks.