OK, here’s the thing: When I selected fruit beer as the theme for this month’s instalment of The Session (that beer-blog round-up thingie that a bunch of us do on the first Friday of every month, and that I’m hosting for August), I did so in anticipation of the pending arrival of Liefmans Kriekbier as part of the LCBO‘s summer beers promotion. I loved this beer when I first tried it a couple of years ago, and was looking forward to downing a couple of bottles to see if it’s as good as I remembered, and to write about it for The Session.

However, the beer – along with its non-fruited counterpart, Liefmans Goudenband – never showed, leaving me at a bit of a loss as to what beer I would write about it. After all, as my fellow Ontarian Stephen Beaumont mentions in one of his contributions to the Session, there are very few fruit beers produced up here, and only a couple of imported examples on our LCBO and Beer Store shelves. But I guess the beer gods were smiling on me, as I managed to get my hands on three new fruit beers in the past week, giving me a lot to write about after all. The first was a beer that came in as a part of the now Liefmans-free LCBO release: Chapeau Banana Lambic from Belgium’s Brouwerij De Troch. The Chapeau line-up consists mainly of highly sweetened and strangely flavoured lambics, and my past experiences with other Chapeau beers like Exotic (pineapple) and Mirabelle (plum) had been, shall we say, less than stellar. But in the case of the Banana, I was surprisingly not offended by it. In fact, I kinda liked it, and even picked it as my Beer of the Week over on Taste T.O. this week. Here’s a bit of what I wrote about it there:

The aroma is a combination of those marshmellow banana candies I used to like as a kid (yeah, you know the ones I mean), mixed with a slight lambic funkiness. (My wife also found notes of strawberry, melon and kiwi.) The body is sticky, and not very refreshing, which is a common fault in sweetened fruit beers (or any overly sweetened drink, for that matter). The flavour is quite sweet off the top, although it tastes more like real banana than the candyish aroma suggests, and there’s a pleasant tartness peeking through in the finish.

That being said, beers like this are still closer in style to coolers and other alcopops than good quality fruit beers. Which is quite the opposite of the second one I tried thanks to my pal Paul bringing it to a tasting night: Oud Beersel Oude Kriek from the respected Belgian lambic producers Brouwerij F. Boon. This hazy ruby-rose coloured brew is a much more traditional fruit lambic, with the expected funky and musty aroma with notes of sour cherry, wood, old books and mouldy cheese. (Yeah, I know, it doesn’t sound that appealing when I write it, but believe me, it was.) After the aggressive aroma, the flavour was actually a bit of a let down – it was good, very dry and tart with a strong cherry character, but a bit milder than the aroma let on. Still, it’s a classic example of the kriek lambic style, and provided a great contrast to the Chapeau sugarbomb that I drank the night before. Moving from the Old World to the New, my third fruit beer of the week came to me courtesy of import agents Roland + Russell who dropped off a package of a few of their new offerings for me to sample. It actually contained two fruit beers, but I only had a chance to sample one of them: Southern Tier Raspberry Wheat Ale from Lakewood, NY. While I’m usually underwhelmed by fruit flavoured versions of North American wheat beers, I’d enjoyed pretty much every Southern Tier beer I’d tried before this one, so I had fairly high hopes. Unfortunately, it followed the pattern of it’s style: light golden-yellow colour; lots of fruit and faint malt on the nose; thin, spritzy body; and a mild, lightly fruited flavour. It was certainly refreshing, especially during the nasty heat wave that we’re currently experiencing in Toronto, and I’d take it over the Chapeau Banana any day of the week. But I guess I just expected a bit more oomph from a Southern Tier beer.

So now that I’ve got my own post out of the way, it’s time for me to put on the hosting hat for this month and compile a round-up of the posts that all of my fellow Sessioners have published today (in most cases, in a much more timely manner than yours truly). I’ll get that together over the next day or two, allowing any stragglers to get in on the action before posting the final tally. If you have a contribution to be included, drop me a line or comment on this post.

Posted in beer reviews, The Session 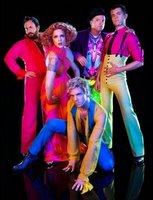 Those familiar with my past music-related activities might be surprised to see the Scissor Sisters as my first music recommendation on this blog, but they’ve actually been a a guilty pleasure of mine ever since I first heard their wonderfully over-the-top cover of “Comfortably Numb”.

I’ve been anxiously awaiting their upcoming second album, Ta Dah, and I recently stumbled across a leak of the first single, “I Don’t Feel Like Dancin'”. Like much of the first album, this track is an unabashed throwback to the heyday of disco when it crossed into the mainstream and cross-bred with rock and pop. Elton John participates on this track in some way, and his influence definitely shows – imagine a late 70s collaboration between John and the Bee Gees, and you’ll have some idea what this sounds like. It’s campy, cheesy, and catchy as hell, and I’m loving it!

The big question, though, is what beer goes best with the Scissor Sisters? Well, you’ll probably want something fruity and fun, but with a bit of a bite to it as well. From stuff I’ve tasted recently, I’d have to suggest St. Louis Premium Kriek, which has the candy and cough drop notes that you’d expect from a sweetened cherry lambic, but with a mild & pleasant tart funkiness in the finish. Sweet and funky – a perfect match!