When it was announced in October 2009 that Molson Coors – via its Creemore Springs subsidiary – would be acquiring Granville Island Brewing, it inspired a fair bit of speculation regarding how long it would be until brands from one of the breweries was introduced into the market of the other. Apparently the answer to that question was “just under two years”, as Granville Island English Bay Pale Ale made the trip east to Ontario back in July.

It was around that time that a friendly Creemore rep passed me a six pack to try, I’ve tipped back a bottle every now and then in the couple of months since, and having now finished the half-dozen, I’ve come to two conclusions: (1) I like it; and (2) I won’t go out of my way to drink it again.

Yeah, I know that these conclusions seem to be contradictory, but here’s the thing: English Bay Pale Ale is, as Stephen aptly puts it, a “highly quaffable ale.” It has a nice dark copper hue; a nutty caramel aroma with faint peppery tinge; and a flavour that could use a bit of a boost in the hops department, but which still fits nicely into the “well balanced UK-style pale ale” niche that appears to be the aim.

That said, it’s also a beer that leaves little in the way of an impression, lasting or otherwise. Even while it’s being consumed, there’s little to grab the drinker’s attention (which probably explains the somewhat generic nature of my tasting notes above), and even less remains on the palate or in the memory once the glass is empty.

In other words: It’s not a bad beer, but it’s also not a memorable one. 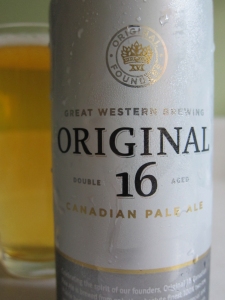 When it comes to selling beer, it helps to have a good story to tell. And when it comes to good stories, it’s hard to beat the one behind Saskatoon’s Great Western Brewing.

Opened in 1927 as Hub City Brewing Company, the brewery changed hands a number of times over the years, ending up as a branch of Carling O’Keefe until 1989, when the Molson/O’Keefe merger threatened it with closure. To avert this fate, sixteen employees got together and purchased the brewery and relaunched it in 1990 as Great Western.

In the years since, Great Western has never had an pretenses of being an artisanal craft brewery. Its brands are aimed squarely at the mass market and sold largely in Saskatchewan, where the brewery’s local and independent nature is what keeps them selling. So it was a bit surprising to see the launch back in March of Original 16 Canadian Pale Ale, a self-described “premium beer brand” released and named in honour of the brewery founders.

Having now tried the few cans that the folks at Great Western were kind enough to send me, I’m reminded that in the world of beer marketing, the word “premium” can have a variety of meanings depending on the context. Or more to the point – when a brewery that normally produces mass market pale lagers puts out an ale and describes it as a “premium beer,” it’s probably not going to be a rich, hoppy, full-flavoured brew.

Based on Original 16, it’s more likely to be a clear golden ale with a light and sweet aroma of honey-on-toast and fruit cocktail, a crisp and clean body, and a refreshing flavour profile with notes of honey, lemon, grape skin and cut grass. What makes it “premium” is the fact that it’s an adjunct-free, 100% barley malt brew, and that its initial 7 day fermentation is followed by nearly four weeks of aging, a rarity for mass market beer.

Basically, Great Western knows its customers, and has brewed a beer that will appeal to them – i.e. a simple, clean, golden ale that has strong stylistic similarities to a a simple, clean, golden lager. It might not turn the head or excite the palate of someone whose taste is more inclined toward big and bold craft beers. But for what it is, Original 16 is nice little beer.

Posted on August 21, 2007 by Greg Clow| Comments Off on Beer of the Week – Church-Key West Coast Pale Ale

This article was originally written in August 2007 for the food & drink website Taste T.O., and republished here in October 2011 (but back-dated to match the original publication date) after Taste T.O. was shut down and taken offline.

Spend any amount of time talking to a serious beer geek, and odds are they’ll soon start raving about the beers being brewed on the West Coast of North America, most notably those that come from the Pacific Northwest and the San Diego area. Much like the West Coast hip-hop artists of the ’80s and ’90s, many brewers out there take a more aggressive and experimental approach to their craft, creating beers that push the envelope in terms of flavour (especially hops) and alcohol levels. This trend toward so-called extreme beers has now spread throughout the country and around the world, but the American West Coast was the primary breeding ground for these over-the-top brews.

While it’s not quite so out there as such monstrous Western US brews as Stone Arrogant Bastard or Russian River Pliny the Elder, West Coast Pale Ale from Church-Key Brewing of Campbellford, Ontario still manages to live up to its name. With a very generous hopping level – especially by the usual Ontario brewing standards – West Coast may very well be one of the bitterest beers available in our province today. And I mean that as a compliment.

While the flavour of hops is definitely an acquired taste, the strong notes of citrus and herbs that they contribute to this beer are actually quite refreshing. It also helps that Church-Key owner and brewmaster John Graham feeds this brew a good amount of malt, which gives it enough body and up-front sweetness to balance the bitterness. Stylistically, I suppose it sits somewhere between a traditional India Pale Ale and a newfangled American Pale Ale, but what really matters is that it tastes fantastic. Which is probably one of the reasons that Church-Key took the award for Best Ontario Microbrewery (Outside of the GTA) at this past weekend’s Golden Tap Awards at beerbistro.

Like all of Church-Key’s beers, West Coast Pale Ale isn’t widely available in Toronto, but if you frequent some of the city’s better beer bars such as Volo
or C’est What, you may come across it. If you prefer home consumption, you’ll have to head out to Campbellford to pick some up, as bottles of all Church-Key products are available only at the brewery. Church-Key is also the official beer supplier for the Harvest Wednesdays series at the Gladstone Hotel, and they’ll be one of the craft breweries pouring samples at the Black Creek Brews Fest taking place August 25th & 26th at Black Creek Pioneer Village.

Posted on July 3, 2007 by Greg Clow| Comments Off on Beer of the Week – Southern Tier Phin & Matts Extraordinary Ale 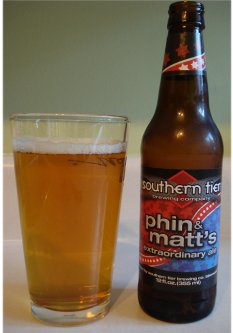 As I’ve lamented in this column at least once before, the representation (or rather, lack thereof) of U.S. craft beers on LCBO shelves is just pitiful. There are literally hundreds of small breweries in the States – some of them just a few miles across the border – making absolutely outstanding beers, yet the LCBO chooses to ignore them almost completely.

Thankfully, though, there are a few import agents and beer-friendly establishments in Toronto who are willing to go through the hoops necessary to bring in a few interesting things from south of the border on a private order basis. On the bar and restaurant side of things, Ralph Morana at Volo was one of the first local publicans to get serious about private orders of American beers, and he managed to bring in some great exclusives by dealing directly with the breweries, although the red tape involved has caused him to cut back on these sort of orders for the foreseeable future. beerbistro is also fighting the good fight, with a slew of exclusive offerings in stock now for their American Beer & Barbecue Festival which launches tomorrow.

As for the import agents, established middle men like Esprit are still repping a few solid breweries like Rogue and Dogfish Head, but an upstart agency from Burlington called Roland + Russell has been grabbing a lot of attention on the local beer geek scene in the last few months due to their rapidly growing portfolio of breweries from around the world.

Somewhat ironically, one brewery in their fold that has garnered the a large amount of interest and orders is also the one that is geographically closest to us: Southern Tier Brewing of Lakewood, NY. One of Western New York’s top craft breweries, Southern Tier became known to many local beer aficionados last year when Volo brought in a couple of their beers. Like many American craft breweries, they have become known for brewing big beers with lots of flavour, lots of alcohol, and (usually) lots of hops, but their flagship brand is the slightly more subdued Phin & Matts Extraordinary Ale.

I say “slightly” because compared to a lot of our local beers, this is still a pretty aggressive ale. It doesn’t look too threatening in the glass, just a nice clear golden colour with a small white head. But once you take a whiff, the pungent, grapefruit-like aroma of the Cascade hops favoured by many U.S. craft brewers makes it obvious that this beer has some balls. Those citric hops are prominent in the flavour as well, but they’re balanced with a good dose of malt that gives the brew a slight orange candy note, before it moves into a dry peppery finish.

So on the eve of their Independence Day, I raise my glass to our neighbours to the south. If any of them are reading this, I say to them: I may not like your leader, your foreign policy, your gun laws, or your lack of universal health care, but I sure do like your beer. Happy Fourth to all, y’all!