Posted on November 16, 2008 by Greg Clow| Comments Off on Belated Buckbean Review 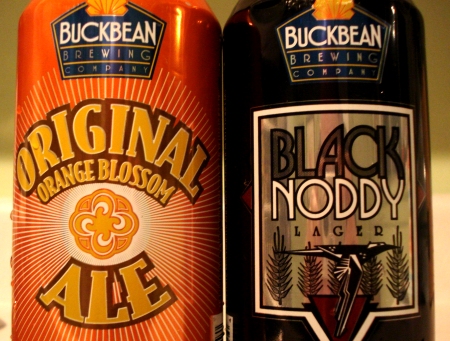 Now that I’m back to blogging on a semi-regular basis, I figure it’s about time that I catch up on posting reviews of a few beers that I received and drank during my unintended break. First up: A pair of brews from Buckbean Brewing Company, a relatively new brewery in Reno, Nevada.

I was first contacted by someone at the brewery back in the spring or early summer with an offer to send me some samples to review. The first attempt to get a package to me failed when it disappeared along the way – likely due to thirsty customs agents opening it for inspection – so I arranged for a friend in Buffalo to receive a reshipped box, and eventually got the beers in September, at which point the ol’ blog was on an unintended hiatus. At least I was on the ball enough to take a picture when I drank them!

I was really interested in trying these beers for several reasons. First, I’d never tried a beer from Nevada before (not surprising, as the state isn’t exactly a hotbed for craft brewing action). Second, the styles of the brews – a schwarzbier and an orange blossom ale – are pretty unique for a fledgling brewery to come out with as their first offerings. And third, they’re in cans, which I’m glad to see more and more small breweries moving towards (for beers that are suitable for cans, at least).

As it turns out, I was pretty impressed with both of them, or so my tasting notes from the time suggest:

Buckbean Black Noddy Lager
Deep brown – almost black – with a medium tan head. Aroma of charred and roasty malt with notes of coffee and cocoa and a bit of smoke. Medium bodied. Flavour follows the aroma very closely – rich and roasty with hints of coffee, cocoa and smoke – and a dry, well-bittered finish with some nutty notes. Excellent!

So, belated thanks for Buckbean for sending these beers my way (twice!), and apologies for taking so long to post my thoughts on them. It’s been years since I’ve been in Nevada, but it’s good to know that there will be at least a couple of decent beers for me to drink down there if/when I ever make it back.

Comments Off on Belated Buckbean Review 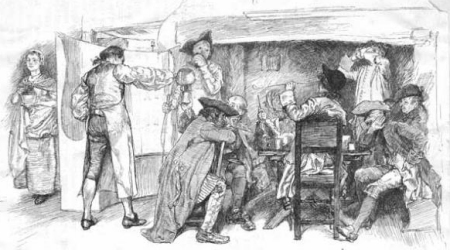 So the other day, I was catching up on some beer blog reading, and I saw a post on Troy’s blog where he apologized to his readers for not “posting nearly as frequent as I normally do” – i.e. he had only been posting once every two days or so, rather than at least once a day.

Which made me feel like a schmuck, since I hadn’t made a post to my blog in three months.

It’s not that I haven’t wanted to. It’s just that work and Taste T.O. and various other things (some of which are beer-related, and some of which aren’t) have been taking up more and more of my time lately. But still – three months? That’s just pathetic, innit?

So I figured it was about time to do something about it. Problem is, I’m not one of those bloggers who can quickly crank out a few lines and be happy with it. I guess I’m more of a blessay type. Which might make my blog more interesting (or so I hope, at least), but also makes it harder to keep it rolling with new and fresh material.

Still, I’ve got a bunch of topics and ideas in my virtual BB&B file that I’d like to get to sooner rather than later, so I’m going to make more of an effort to make updates here on at least a semi-regular basis. And to help pad things about a bit, I can always fall back on reprinting things that I originally wrote for publication elsewhere.

Like, for instance, the following article on dark German lagers that I wrote for the Spring, 2008 issue of TAPS Magazine as the second instalment in my “Beer Styles 101” column. Because as the TV networks like to say about reruns: If you haven’t seen it, it’s new to you!

END_OF_DOCUMENT_TOKEN_TO_BE_REPLACED

Dark Duo from Down Home 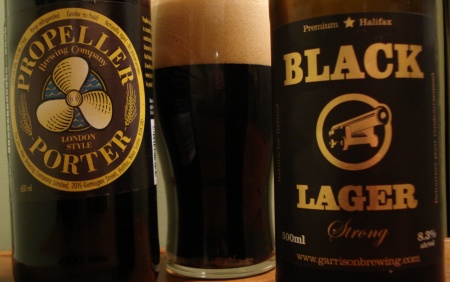 Like most people who live in Toronto, my wife and I weren’t born here. My family is from Summerside, Prince Edward Island (although I only spent a few years there before we moved to a small town in Ontario), and Sheryl is originally from Halifax. We both ended up in Toronto around the same time in the late 1980s – although our paths didn’t cross until a few years later – and while we both love our adopted home, we still feel some undefinable connection to the East Coast. Especially Sheryl, who didn’t leave until she was 18, and therefore needs to tip her toes into the Atlantic every three years or else she’ll turn into a lobster, or something like that.

Due to my honey’s Haligonian roots, and my fondness for the city based on a couple of visits, we tend to keep an eye on the brewing scene out there, especially the wares of the city’s two micro-breweries, Propeller and Garrison. We were pleased when Propeller made some inroads into the Ontario market a few years ago and got a couple of their beers into the LCBO and a few pubs – most notably the Nova Scotia-themed Duke Of Argyle, which sadly closed late last year. But their foray here was short-lived, and Garrison never attempted it at all (although given the somewhat variable quality of their brews in the past, that might’ve been a good thing).

But now, there are a couple of bits of good news for those of us who know that Keith’s isn’t the only Nova Scotian beer out there. Propeller has hooked up with super-duper import agents Roland + Russell to get their beers back into Ontario, with private orders starting soon, and a return to the LCBO hopefully to follow. And over at Garrison, they’ve brought in new head brewer Greg Nash – formerly of the acclaimed John Shippey’s Brewpub – who has improved their existing products, and has added some pretty interesting new beers to the line-up.

To mark the Propeller deal, Vlado from R+R passed along a bomber bottle of their Porter. It had been at least a couple of years since I’d last had it, and it’s just as good as I remembered. The full name is Propeller London Style Porter, which is fitting as I find some similarities to Fullers London Porter: dark brown body, long-lasting beige head, soft mouthfeel, and an aroma and flavour of well-roasted malt with notes of chocolate, coffee, licorice and smoke. It’s a favourite of Sheryl as well, so I was glad when Troy over at Great Canadian Pubs & Beer hooked me up with a second bottle.

Speaking of Troy, he was also kind enough to slip me a bottle from his exclusive stash of Garrison Black Lager, an “Imperial Schwarzbier” released late last year in a limited run of 2007 bottles. I thought that Nash’s Imperial Pale Ale was pretty damn good when I tried it in the fall, so I was expecting good things from this one, and it didn’t let me down. As you can see from the photo above, this baby poured almost-black with a huge tan head that thankfully settled down pretty quickly, leaving some nice lacing behind. The aroma and flavour both hold dark roasted coffee, charred malt, dark sugar, smoke, dark bittersweet chocolate, and just a hint of booze. The body is full without being sticky, with a nice soft edge. If Troy weren’t young and fit, or I weren’t old and and fat, I would be tempted to fight him for the rest of his holding.