Posted on April 10, 2007 by Greg Clow| Comments Off on Beer of the Week – Wellington Arkell Best Bitter

This article was originally written in April 2007 for the food & drink website Taste T.O., and republished here in September 2011 (but back-dated to match the original publication date) after the Taste T.O. blog was shut down and taken offline. 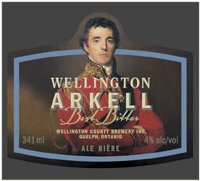 When I first started learning a bit about British beer culture, I was confused by references to European lagers like Stella Artois and Heineken as being “strong lagers”. At 5.2% and 5.0% respectively, they seemed like normal strength beers to me, since 5.0% is pretty much the standard alcohol level for most mainstream beers in Canada.

What I didn’t realize at the time was that many popular pub ales in England tended to have alcohol levels in the 4.0% range. Even Guinness Draught, that supposedly “heavy and strong” beer, is only 4.1%. And that difference of a percentage point or so makes more of a difference than you think, especially when you’re throwing back a few in the course of the evening. Hence the term “session beer”, which is often applied to these ales that have less alcohol but are still full of character.

Here in Canada, of course, a 4.0% beer generally brings to mind Coors Light, Blue Light, Canadian Light – basically, bland and watery brand extensions that have even less flavour than their full-strength counterparts. But thankfully, the UK-style ale specialists at Guelph’s Wellington Brewery didn’t let the negative stereotypes stop them from creating Arkell Best Bitter, a 4.0% beer that has little in common with those macro-brewed light beers.

Available in bottled, draught and cask-conditioned form, Arkell is an orange-gold ale with a soft aroma that holds notes of malt, honey and grass. The body varies depending on the serving format, with the softer body of the cask version being preferable to the more carbonated draught and bottle versions, at least to my palate. The flavour doesn’t hold many surprises, but is very inviting and moreish, with a nice balance of caramel malt and slightly floral hops.

Simple but well made, flavourful without being overpowering, a good match with pub foods like fish & chips or pizza, and an alcohol percentage that let’s you have a few without getting too tipsy. All of these are good reasons to consider Arkell Best Bitter a quintessential session beer, especially if your session is taking place in an establishment that serves the cask-conditioned version, such as C’est What (67 Front Street East) or The Cloak & Dagger (394 College Street).

Comments Off on Beer of the Week – Wellington Arkell Best Bitter